‘Panaginip’ is a showcase for standout original songs 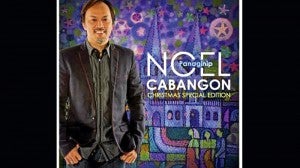 If you haven’t added Noel Cabangon’s “Panaginip” to your playlist yet, now’s the time. Hit any music store and grab a copy of the recently released Christmas Special Edition – offering four additional Christmas-themed songs, it’s a better value that will put you in the holiday mood in a way that tinny carols played over mall speakers never can.

First released earlier this year, “Panaginip” is the singer/songwriter’s seventh solo album. And, unlike 2009’s “Biyahe,” which mostly features revivals, this collection is a showcase for original songs, with an odd cover here and there. It’s been reissued, not just in time for the holidays, but also for Cabangon’s retrospective concert, “Noel Cabangon…Simpleng Musikero,” which will be staged at Music Museum on Dec. 2 and 3.

“Panaginip” kicks off with the singer-songwriter’s take on “Bulag, Pipi at Bingi,” written by Snaffu Rigor and popularized by Freddie Aguilar. Noel’s version is crisper and mellower. The arrangement, courtesy of Bob Aves, has a more unplugged feel due to the emphasis on his and Cabangon’s excellent acoustic guitar playing.

Following on its heels is the first original tune in the playlist, “Dahan-Dahan Lang,” where Cabangon sings and plays with a full band. The song is also the first of a series of laidback love songs that make for a nicely chilled-out listen. Ebe Dancel and Nina lend their voices to two of them – “Hulog Ka Ng Langit” and “Ikaw Na Sana,” respectively.

There are quite a few standout tracks, including the lighthearted “Dahil Nariyan Ka” (from 2001’s “Pasakalye”) and the title song, “Panaginip.” Like the former, it’s a hook-laden, feel-good number, with the incorporation of Edwin Vergara’s electric guitar giving it a more rock vibe.

Other tracks worth mentioning are two other covers of classics that deserve to get more airtime – “Sangandaan” and “Tayo’y Mga Pinoy” –as well as the catchy, very of-the-moment “Umuulan sa Tag-araw, Umaaraw sa Tag-ulan” and the anthemic album-ender, “Ngayon Ang Bagong Simula.”

The theme song for Mike de Leon’s “Sister Stella L,” “Sangandaan” was written by Pete Lacaba (who also wrote the movie’s screenplay), and the lyrics have an inherent musicality. “Umuulan” has a driving beat that underscores the gravity of the song’s climate change and global warming message, while “Bagong Simula” is upbeat and ends the album on a hopeful, positive note.