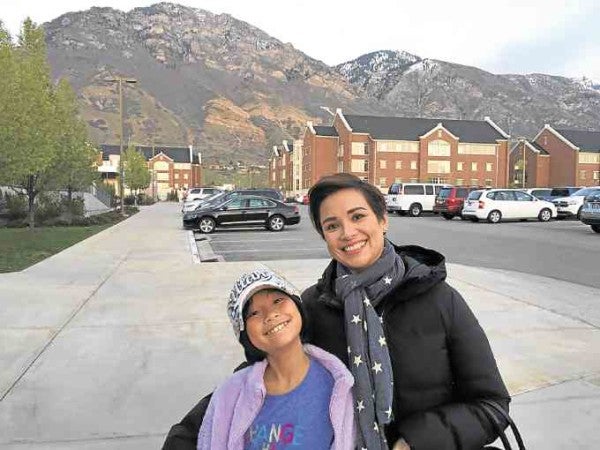 The author with daughter Nicole

PROVO, Utah—My daughter Nicole and I (along with makeup artist Kusie Ho and agent Josh Pultz) are currently in the midst of a concert tour. The first week was spent in New York, with the shows taking place not too far away—the most distant destination at that point was Pittsburgh, Pennsylvania (via a quick 46-minute flight from LaGuardia Airport). However, that has now changed, and we have now flown to destinations further away.

Traveling is something that both Nicole and I are used to. She knows to not get overly cranky when an early travel day is upon us. I get ready the night before, as I tend to be forgetful. Travel documents need to already be in my purse before I go to bed.

For much of this stay, we’ve had challenging travel days. Unpredictable weather conditions have turned airline schedules topsy-turvy, including the one we chose for this tour, Delta Airlines.

Limited visibility in LaGuardia Airport area delayed our return from Pittsburgh to New York, by three and a half hours. Our woes didn’t end there, though.

Our next flight from JFK airport was to Sacramento, with a connection in Salt Lake City, Utah.

(I had a couple of nights at Cache Creek Casino Resort, a favorite destination for Filipino performers, as evidenced by the photos of Gary Valenciano and Sharon Cuneta in the showroom, and blurbs on the TV monitors around the property for the coming shows of Anne Curtis, Mark Bautista and Aegis.)

We arrived at JFK with lots of time to spare. However, once we got there, we received word that there would be a delay. I got Nicole a hotdog from Shake Shack to tide her over.

However, we then got to the bottom of why there was a delay at all. Apparently, the bad weather in Atlanta, one of Delta’s larger hubs, affected the arrival of flight attendants trying to get to where they needed to be.

The crew that was supposed to take care of our flight was coming from there. After profuse apologies from the gate agent, she let us know that they were able to wrangle flight attendants that were in New York on their days off and who agreed to take care of this flight.

Please allow me to say “thank you” for going above and beyond the call of duty.

Now this delay stressed us out a little bit for the connecting flight. Delta automatically booked us on the next flight out of Salt Lake, and because there was Wi-Fi on board, I could stay on top of everything.

I was also in touch with Josh, who was checking with our travel agents and seeing what other flights we could take. I saw that we would be taking off from another concourse, which means we would have to hoof it.

As fast as our legs could take us, we headed to our gate. We first checked in with the gate agent to confirm if we were booked for this flight and, thankfully, we were.

Whoever you are, know that your efforts weren’t  unnoticed.

It was a bumpy ride to Sacramento, but thankfully, Nicole fell asleep, and the flight itself was short. Once we landed, we had a rainy but uneventful drive to Cache Creek, where we were welcomed with chocolate-covered strawberries and smiles.

When we got ourselves settled in; Nic took a hot bath with a mountain of foam, while I turned on the TV and surfed the internet.

By the way, the concerts there went very well.

Now we’re here in Provo for a concert tomorrow night, but by the time you read this, I’ll be in San Francisco.

Let’s hope that the succeeding travel days will be smooth. We have a lot of places yet to go, concerts to do and people to see.

While I’m at Feinstein’s on Easter Sunday, “The Voice Teens” will be having its maiden broadcast. Please tune in
to meet some of the most talented teen artists to grace our stage.

And, to everyone at “Your Face Sounds Familiar Kids,” congratulations on a wonderful season, and to McNeal “Awra” Briguela for emerging as its champion!