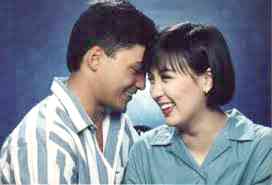 After hesitating for nine years, actress Sharon Cuneta is now willing to do a “reunion movie” with ex-husband Gabby Concepcion not only for the sake of their fans.

“There was clamor for it when he (Gabby) first came home from the United States. I was the one who hesitated back then, but I heard that he was interested,” Sharon said.

So what made her change her mind?

“First, for closure,” she said. “I know our fans, who grew up with us, were also hurt when they learned that we broke up.”

The other reason, Sharon said, was “to signal a new beginning. If the teamup becomes successful, it could lead to other projects, or even endorsements. Ours was such a strong brand…”

However, she quickly added: “Truth be told, I’ve had bigger hits with other leading men and on my own. This project was actually meant for someone else. I just told Star Cinema to give the Gabby-Sharon tandem a try.”

She denied rumors that the Star Cinema reunion movie project had been shelved after a delay in its shooting. They were supposed to film last January.

“It’s painful to be let down—our fans will be disappointed,” she said. “I’ll just keep quiet about it until we’re halfway through the movie. I have to finish it at some point, because I have a concert tour abroad in June.”

The actress said she would resume intense dieting as soon as the shooting schedule of her coming movie with Gabby was confirmed.

Sharon, who has been working on losing weight for over a year now, said she had realized that the key to shedding the extra pounds was a definite change in lifestyle.

“You eat, and not lamon (gorging),” she said, laughing. The Megastar admitted that she had tried surgical procedures to lose weight in the past, “but these things are useless unless you control your eating. When I’ve learned to accept that, I realized that I was OK with just eating small meals to satisfy my cravings. If I wanted cake, I’d eat a bit but not finish the whole slice. Before, I had to have two slices.” 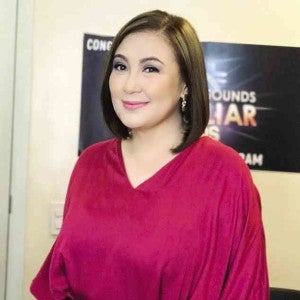 Sharon, who is working on losing 20 pounds more, added: “I’m not into eating rice. My downfall is eating bread with butter. Cutting down on it was difficult for me. The principle is that you do the reverse of whatever you did that caused you to gain weight.”

The 51-year-old actress admitted that her progress was rather slow. “My overall loss is only 65 lbs. It’s been a year and two months since I promised to go on a diet in 2016. I relaxed on it a bit because I got tired of the diet. Once I start feeling deprived, I’m scared that I might binge again.”

Sharon said she has already tried the Cohen diet but discontinued it, “because I’m scared of the rebound effect.”

She’s now using what she calls “a variation of the Scarsdale Medical diet, “which helped me lose weight in the 1990s and when I had Frankie (Pangilinan, her second daughter).”

She explained that the diet “allows you to eat more protein and less carbohydrates. You’re also allowed fruits, which is good because this satisfies your sweet tooth.”

Sharon is currently part of the talent tilt, “Your Face Sounds Familiar,” and the soon-to-air “The Voice Philippines Teen Edition.”