Sharon Cuneta on TV5: I’ll work my famous behind off | Inquirer Entertainment

Sharon Cuneta on TV5: I’ll work my famous behind off 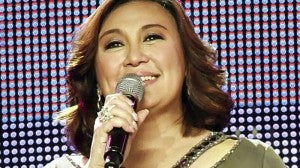 Sharon Cuneta, TV5’s newest contract star, vows to “work my famous behind off.”

In a statement sent to Inquirer on Wednesday, Cuneta said, “The fire in my belly is back. I have so missed it!”

After 23 years with ABS-CBN, the singer-actress, dubbed “Megastar,” inked a five-year contract with TV5 on Tuesday evening.

In her new home station, Cuneta is slated to host a daily talk show and a reality show. She will also star in a movie with ex-husband Gabby Concepcion, to be produced by Studio 5 and Viva Films.

No one mentioned how much the deal was worth. Prodded about a rumored P1-billion tag price, Cuneta and the execs smiled and laughed, but remained tight-lipped about the exact figure.

Cuneta did say, however: “No matter what is written or what you hear, it’s my loyalty that is priceless.”

Del Rosario told Inquirer on Friday, “It will be commensurate to her stature in the industry.” He added, “[For her, this move] is not about money; it’s about being able to do the kind of shows that she wants.”

Observers speculated that the rumored P1-B package could include projected income for Cuneta as co-producer of several future undertakings (Del Rosario confirmed her “active role” in these) with TV5, through her own Mega Productions.

In her statement, sent via SMS, Cuneta said she would “always love my family at ABS-CBN.” But the rest of the message was somewhat telling: “I am happy to be with the happy network, TV5. I look forward to making new friends—and the best TV shows. I cannot wait to once again make the most of the gifts that God has blessed me with, and I will make sure I use them to the fullest.”

Tuesday night before the contract signing, the atmosphere simmered with excitement as employees gathered to welcome their new Kapatid (trade monicker for TV5 talents, workers and loyal viewers.)

After several photo ops, the 45-year-old singer-actress proceeded to the boardroom, where she turned emotional, even shedding a few tears before signing the contract.

She said in a TV5 interview earlier, “I’m happy… a little nervous, a little scared, because it’s all new people and it’s a new home.” On another program, she mused, “Once in a while, you have to make a change in your life. I think at this point… this is the best move for me.”

She said the enthusiasm she felt was comparable to when she first joined the ABS-CBN network. Speaking of which, Cuneta met with ABS-CBN bosses, led by chair and CEO Eugenio “Gabby” Lopez III and president Charo Santos-Concio on Monday night to say goodbye.

A highly placed source said Cuneta was a little weepy at that meeting, too. She later told a friend, “It was painful.”