‘Your Name’: US audiences end 7-month wait for blockbuster anime

With its wistful, engaging tale of two teens mysteriously able to live each others’ lives, “Your Name” is already the highest-grossing Japanese animated film of all time before it even opens in the United States next month.

Top of the Japanese box office for over two months straight following an August 2016 release, “Your Name” is the second highest-grossing Japanese-made film in its homeland (Studio Ghibli’s “Spirited Away” being first) as well as the fourth-biggest film of all time in Japan (after “Spirited Away”, James Cameron’s “Titanic” and Disney’s “Frozen”.)

The domestic success translated internationally, as word spread and theatrical debuts were made first across Southeast Asia, and then, from November, in Europe. By January, it was the biggest animé of all time on a worldwide basis, and home video releases swiftly followed.

It’s also been acclaimed by professional reviewers with a 97 percent Rotten Tomatoes approval rating, while fans on the encyclopedic Anime News Network made it the site’s single highest-rated movie.

If Hayao Miyazaki has been Japan’s best-known name in animation until now, Makoto Shinkai is in the ascendancy.

Miyazaki co-founded Studio Ghibli and directed many of its best-loved films, from 1989’s “My Neighbor Totoro”, 1997’s “Princess Mononoke”, and all the way to the studio’s multi-award-winning worldwide successes such as “Spirited Away” and “The Wind Rises”.

Thirty-one years his junior, it seems that Shinkai could be Miyazaki’s successor, thanks to the profile-raising effect of “Your Name”.

An author, artist, comic book writer and illustrator, as well as a film director, Shinkai is well associated with the CoMix Wave studio, just as Miyazaki is with Studio Ghibli. 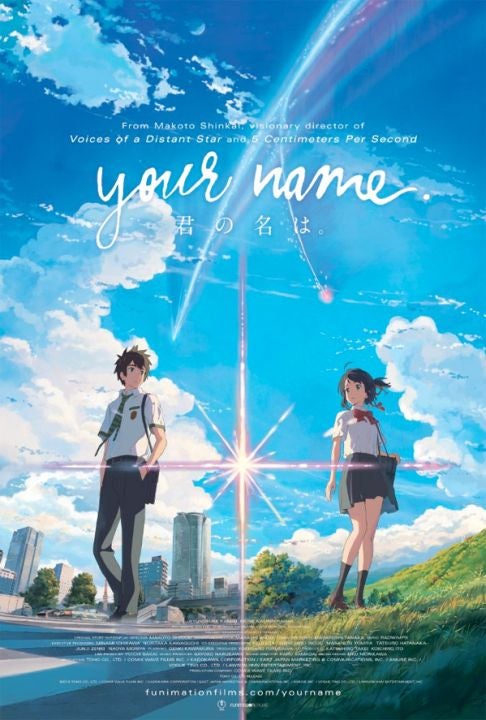 Lavish art, charming characters, and stories that frequently dispose with the need for a central villain typified Miyazaki’s work, comparisons to “Your Name” bear up.

But if an Oscar win for “Spirited Away” assured Miyazaki of international renown, Shinkai’s “Your Name” must tread a different path.

Distributors for “Your Name” held a two-week, one-theater limited Los Angeles run for the movie a full four months ahead of its U.S.-wide release, meeting the requirements for Academy Awards contention in 2017.

Having launched to vast critical and commercial success in Japan in August, by the end of November 2016, it had gained two nominations at the U.S. animation industry’s Annie Awards, and one at the International Press Academy’s Satellite Awards.

But that tiny L.A. run wasn’t enough to open doors to the Academy’s voting masses. “Your Name” didn’t even make it as a nominee, as the Oscars went for mainstream releases “Moana”, “Kubo and the Two Strings”, “My Life as a Zucchini”, Ghibli co-production “The Red Turtle”, and eventual winner “Zootopia”.

But just 15 minutes down the road, the Los Angeles Film Critics Association had its finger to the wind: it was there that “Your Name” was pronounced 2016’s animated film of the year. JB

Read Next
WATCH: ‘Ghost in the Shell’ teaser features first 5 minutes of movie
EDITORS' PICK
Get exciting deals and discounts when you download the new McDonald’s App
‘A greener, cleaner tomorrow’: A how-to guide for Filipinos who want to help with today’s energy crisis
SM continues to send relief assistance to remote towns in Batangas
Countries with confirmed cases of coronavirus
China expands lockdown against virus, fast-tracks hospital
Palace: US Senate move also made Duterte junk VFA
MOST READ
Taal’s sulfur dioxide emission increases
No time for revelry; Tagaytay instead plans for alert level 5
Palace: US Senate move also made Duterte junk VFA
Dina Bonnevie on Coney Reyes: We have forgiven each other
Don't miss out on the latest news and information.