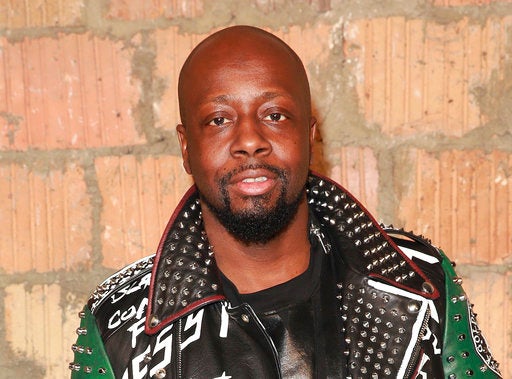 In this Feb. 17, 2015 file photo, Wyclef Jean appears at the Diesel Black Gold fashion show in New York. Jean says he was unfairly detained by authorities in Los Angeles County after being mistaken for a robbery suspect. Jean posted a video Tuesday on Twitter showing himself in handcuffs leaned over a patrol car. The former Fugees star said he tried to explain that he wasn’t the suspect but was ignored and cuffed. AP/INVISION FILE PHOTO

LOS ANGELES—Wyclef Jean, the Grammy-winning ex-member of the Fugees, said he was “appalled” after being handcuffed and questioned by police in Los Angeles.

Haitian-born Jean, 47, came to the United States as a child with his family and grew up largely in New Jersey. That is where the rapper-singer played with a group that evolved into the Fugees — a pun on the word “refugees.”

In the 1990s, the Fugees took home three Grammys, and are known for hits like “Killing Me Softly” and “Guantanamera.”

Now a successful producer and actor as well, Jean won a Grammy for producing “Supernatural,” by Santana. And he rapped alongside Colombian pop star Shakira in uber-popular “Hips Don’t Lie.”

After alleged “furtive movements” by the world-famous musician, Jean was detained, and handcuffed, for six minutes until it became clear the police were on the wrong track.

“I am sure no father wants his sons or daughters to see him in Handcuffs especially if he is innocent,” Jean said on Twitter.

Apparently, the confusion stemmed from similarity between the car in which Jean was traveling, and another that was used in a crime elsewhere.

The star seemed stunned in his comments on Twitter.

“I was asked by the police to Put my hands up. Then I was told do not move. I was instantly hand cuffed before being asked to identify myself,” he wrote.

“Nor was I told why I was being cuffed. In the process I said my name and told them they have wrong person.”

But “they proceeded to ignore me and I was treated like a criminal until other police showed up and pointed out they had wrong person,” Jean added.

“As someone who has law enforcers in my family, I was appalled by this behavior of the LAPD.”

“The Los Angeles County Sheriff’s Department is apologetic for any inconvenience this process caused Mr Jean,” it said in a statement.

“We are grateful we were able to apprehend the robbery suspects and that no one was seriously injured.”