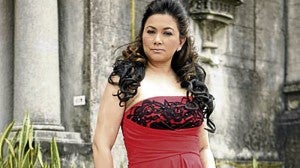 “I can feel it coming. Siyempre mas masarap pag hindi malamig ang Pasko,” says actress Dina Bonnevie, who wants a boyfriend for Christmas. “I still have to decide whether to spend Christmas with my dad here or fly to Switzerland to be with my mom and sisters. Dyahe naman maki-join ako sa celebration ni Tin and Oyo or Danica and Mark.”

What about Bossing Vic? “We keep in touch,” she says. “But not to the point of meddling in each other’s lives. Ang cheap naman if I ask him who he’s dating. He should be the one to wonder who I’m dating (laughs).”

May Ms D’s heart have its D-day soon!

Mark Gil sounded like the excited lolo-to-be that he was when he called me.

“Andi is due to give birth on the third week of November,” he said. “She’s bored and spends most of her time online. I hope I won’t have work when she gives birth because I want to be with her in the delivery room. Still, I’ll definitely rush to the hospital to be with her.”

No more paternity issue. Andi and her coming baby are assured of the Eigenmann’s full support from maternity to eternity.

A concerned friend of Benjie Paras and his wife Lye sent me this text message: “Benjie refuses to talk about Jackie Forster, who has been bad-mouthing him. He doesn’t want to give her the attention she craves. But as someone who knows the truth, I feel the need to clarify things. Jackie claims they were supposed to be partners in ‘Survivor’ but he declined. That’s a big lie. GMA had plans of getting Benjie but not to pair him with Jackie because his kids would object. The two main reasons why he didn’t join: He can’t bear being away from his family that long and they couldn’t agree on his talent fee. His wife is not show biz at all. Jackie mentioned that Lye might be the reason why Benjie refused to pair up with her. The kids are more upset with Jackie now. Benjie is such a good man. He doesn’t deserve such negative talk.”

Being a good friend of Benjie and Lye, I know how much they value family.  Despite his busy schedule, Benj makes sure he drives his kids to and from school. Jackie has no place in his life anymore. It’s a whole new ball game for the former PBA MVP/Rookie of the Year.

GMA Films’ psycho-thriller “The Road,” which opens Nov. 30, is loaded with cliffhangers that will capture the viewers’ imagination from beginning to end. Directed by Yam Laranas, it is top-billed by Carmina Villaroel, Marvin Agustin, Rhian Ramos and TJ Trinidad. Brace yourself for one hell of a road trip!