Kimora Lee Simmons on ‘Life in the Fab Lane’ 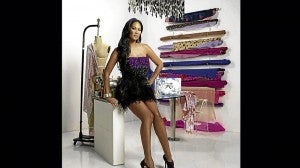 HER STYLE is to be real, “not overly fabricated, because people see through that.”

Here she refers to her popular reality show in the United States, “Kimora: Life in the Fab Lane,” currently in its fourth season on E! Channel. The show discusses how Kimora juggles her life as fashion model and businesswoman with three kids and two husbands— “an ex and the next”— and still remains fabulous.

Kimora, ex-CEO of Baby Phat clothing line and ex-wife of Russell Simmons, a.k.a. “Godfather of Hip-hop,” manages a full line of clothing and accessories as CEO of her new company, KLS Enterprises and president of JustFabulous, an online style-of-the-month club. She has two kids with Simmons—Ming, 11 and Aoki, 8; and one with new partner, African-American Djimon Hounsou, an Oscars multi-nominated actor (“Blood Diamond”), 3-year-old Kenzo.

“There are 500 shows in America where they are always fighting and cursing, but my show is not like that; I think that’s garbage,” she tells Asian journalists in a press conference at the Ritz Carlton.

“I really feel that the state of reality TV is going down. I’m not proud of that. I’m not proud of how women are depicted when you are fighting and scratching and cursing your mom, and you are naked. My show [though it’s become a hit] has none of that.”

“Life in the Fab Lane,” she says, revolves around her pursuits as a businesswoman, not her personal life. “I got a TV show because of my work and credibility in the fashion business, not because of hilarious things I do or crazy stuff…” 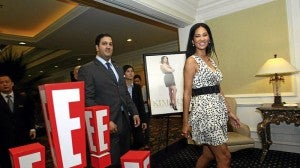 KIMORA impressed the Asian journalists at the KL press conference.

She continues: “Yes it has a bit of my husband, my children, but when it turns just a little exploitative, I back off. It’s difficult to do a show with substance, if its only substance is your life. That’s a mistake that some people make.”

Where exposing and capitalizing on celebrities’ relationships on reality TV are commonplace, Kimora insists, “It’s very tough to have a relationship [in front of TV cameras]; so why I don’t do that.”

She says she aims to educate and show people that a glamorous life entails “a lot of hard work and a high price to pay.” She believes the enthusiastic response to her show is the result of its authenticity. “Kind of being real and not being overly fabricated… because people see through that.”

During the press con, suggestions for her to have a talk show are raised. She’s not averse to the idea, as long as it’s not “stuffy, couchy.” She elaborates, “I’d like it to be conversational, tackling lifestyle, fashion and politics.”

As a model, she says, she has learned outward beauty is not a solid foundation for a career. “What if I get hit by car, break my leg—is my career over? I am the first model to turn my life experience into a lifestyle business and a million-dollar brand. That’s what I want to share with viewers.”

With an African-American dad and Asian mom, Kimora was dubbed by Chanel designer Karl Lagerfeld as “the new face of the 21st century.”

“Lagerfeld was right about that years ago,” she says. “Now, the more ‘mixed’ you are, the more acceptable you become.”

Born poor and “different,” Kimora had to work her way through the fashion industry systems.

Earlier, in school, she was a victim of bullying because of, curiously, her height. She was the “chinky giraffe.” Her mother enrolled her in a modeling class when Kimora was 11—and already standing 5’10”.

She grew up in St. Louis, Missouri, where no one looked like her. “The kids were either black or white, and if you were mixed, it was like, whoa! And to be mixed like me, half-American and half-Asian, I was like, I don’t know, garbage?” This made her, she says, “better, stronger and thicker-skinned.”

At 13, Kimora was discovered by Paris Agency Glamour and started modeling for Chanel. She has since landed the covers of fashion magazines Vogue, Elle and Harper’s Bazaar, and modeled for Christian Dior, Patrick Kelly and Yves Saint Laurent.

Being fabulous, she stresses, is being beautiful inside out, outside in.

“I choose for my life to perpetuate this message of positivity for all colors, races, ethnic background and religion. I want people to realize that beauty comes in all shapes and sizes.”

She isn’t guided by any fashion rule, apart from simply doing what one wants. “You should embrace and express yourself, do things that make you feel great. Sometimes [simple] clothes and a little makeup make you confident—it has nothing to do with money. You are what you are. It has to come up from the inside. And don’t go naked.”

In 2008, the city of St. Louis, Missouri, proclaimed March 14 as “Kimora Day” but, she says, every day is her day and every woman should feel that way.

Two years prior, in 2006, her book, “Fabulosity, What it is and How to Get it,” came out, a “lifestyle manual” that covers all aspects of the subject, from fashion and beauty to finances and spirituality.

Kimora herself practices meditation and makes sure she gets “a lot” of bonding with her kids. She explains, “I practice Transcendental Meditation. I do it for like 10 minutes in the morning and again in the evening.” She says being with her kids and running around the house make her happy. “Chaos calms me down,” she explains.

Sacrifice paved my way to success, Kimora says.  “You do have to sacrifice a lot of things, like sleep, for what you want. You have to sacrifice frivolous whims. A lot of people I know have a day job and another at night because the night job is really their dream and the day job pays the bills.”

Having it all is possible, she believes, “but you need dedication, luck, hard work, help, [so] surround yourself with smart people.”

She’s planning a sequel to her book next year. “Fabulosity today is not the same as it was years ago, but the idea of beauty and power coming from the inside has not changed,” she says. Her first book is about “evolution and revolution,” inspired by her family, especially her two husbands. “Djimon is a precious anchor for me, and a great friend. He’s West African, and was homeless for a time. He has gone through so much.”

Her ex, Russell Simmons, is still a friend as well. “He follows me around like a puppy; he is my business partner, we do fashion together, my skin care…”  One thing she’s learned: “Love your kids more than you hate your ex; life without kids would definitely be a mess.”