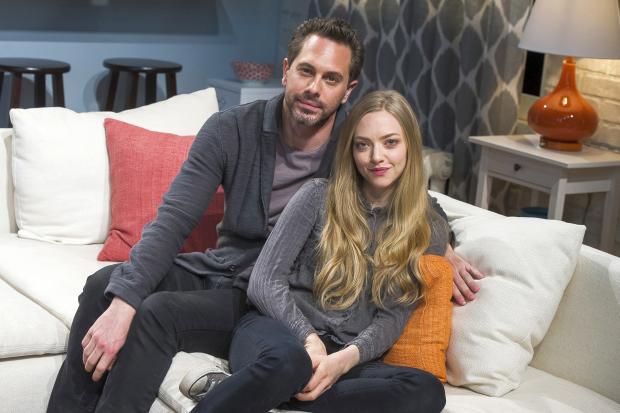 In this photo, taken May 1, 2015, Thomas Sadoski (left) and Amanda Seyfried pose on the set of Neil LaBute’s play “The Way We Get By” at the Second Stage Theatre in New York. Sadoski told CBS “Late Late Show” host James Corden on March 16, 2017, that he and Seyfried got married on March 12, 2017. (Photo by CHARLES SYKES / Invision / AP)

Sadoski delivered the news to “Late Late Show” host James Corden on Thursday’s episode. Sadoski flashed a wedding ring at Corden and told him the pair eloped on Sunday.

He says they “just took off into the country with an officiant and just the two of us and we did our thing.”

The 40-year-old Sadoski told Corden that the ceremony was “beautiful” and “everything that it should be.”

The 31-year-old Seyfried hinted at the big news in an Instagram post before Sadoski’s appearance, writing that he would be talking about “nice things” with Corden.

The “Les Miserables” and “Big Love” actress is expecting the couple’s first child.

Sadoski currently stars in the CBS sitcom “Life in Pieces.”