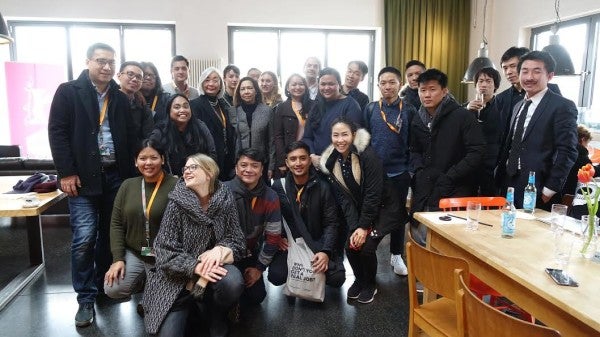 The Philippine delegation at this year´s Talent Campus together with other participants from South East Asia. RELEASED PHOTO

Since 2003, Berlinale Talents has become an annual summit and networking platform of the Berlin International Film Festival for outstanding creatives from the fields of film and drama series.  It is an initiative of the Berlinale and a business division of the Kulturveranstaltungen des Bundes in Berlin GmbH and funded by the Federal Government Commissioner for Culture and the Media, in cooperation with Creative Europe MEDIA, a programme of the European Union, the Robert Bosch Stiftung and Medienboard Berlin-Brandenburg.

The Philippine Embassy in Berlin continues to support Philippine participation in the Berlinale through the promotion and constructive meetings with visiting delegations.  This year, the Film Development Council of the Philippines (FDCP) Chair Liza Diño and Executive Director Don Gerwin Arawan attended the festival and the European Film Market (EFM) in preparation for the country´s participation at the EFM next year.

Possible projects in line with the 100th Year of Philippine Cinema and the ASEAN Integration Festival were discussed during FDCP´s courtesy call with the Philippine Embassy.