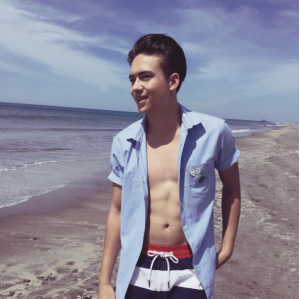 He may be young and new in the industry, but Hashtags member Jameson Blake has proven he can deliver a serious performance, even when confronted with the task of doing a tricky scene.

“I just had to put myself in the right mindset and just tell myself na ‘you can do it, Jameson,’” the actor told reporters at the recent press conference held for the commercial release of the movie.

Despite braving the scene and doing as he was told, this half-American cutie admits he thought about it many times over first.

His mom even gave him her seal of approval for the compromising scene.

His friends are likewise all good with him doing it.

“My friends, they were okay about it, they’re actually pretty proud of me,” he said. JB