What's next for the 2017 Oscar winners? | Inquirer Entertainment 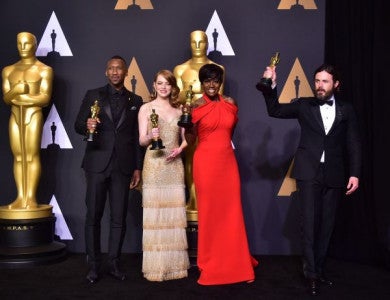 Emma Stone, Casey Affleck, Viola Davis, Mahershala Ali, Damien Chazelle and Barry Jenkins all took home Oscars from the 89th Academy Awards, Sunday, February 28. After relishing in their moment of glory at the star-studded ceremony, this year’s winners will soon be heading back to work.

Here’s a look at what they’ve got in store in the coming months.

After scooping an Oscar for her “La La Land” performance, the 28-year-old actress has a busy year ahead in 2017. As well as joining Steve Carell on the cast of “Battle of Sexes”—a biopic about American tennis players Billie Jean King and Bobby Riggs—Stone will star alongside Rachel Weisz and Olivia Coleman in a historical biopic of Queen Anne, directed by Greek filmmaker Yorgos Lanthimos. The talented redhead will also be stepping into role as Cruella de Vil in Disney’s live action “Cruella” movie inspired by “One Hundred and One Dalmatians.” Emma Stone is heading to the small screen too, filming Netflix series “Maniac” with Jonah Hill between August and November.

Casey Affleck: behind the camera

The Oscar-winning actor is working on his first feature film, “Light of my Life”, writing the screenplay and taking the leading role. Ben Affleck’s brother has also been named as the director of “Far Bright Star”, a western which sees him re-team with Joaquin Phoenix. Still, Casey Affleck will be pursuing his acting career alongside his directorial roles. After “A Ghost Story”, presented in January at this year’s Sundance Film Festival, he will star in “The Old Man and the Gun”, alongside Robert Redford and Sissy Spacek. He even has a TV project in store, “Lewis and Clark”, which is still awaiting a broadcast date on HBO.

Viola Davis: guided by her convictions

The first black actress to win all three acting awards from three different genres—an Oscar for film, an Emmy for TV, and a Tony for the stage—is set to star in “Widows”, the upcoming film from Steve McQueen (“Twelve Years a Slave”). She will also play Harriet Tubman, an abolitionist activist in a TV movie on HBO. The actress will continue to star in the TV series “How to Get Away with Murder” with a fourth season scheduled for fall 2017 on ABC.

Although previously quite discreet on the movie scene, Mahershala Ali’s “Moonlight” Oscar win will no doubt see the American actor move into the limelight this year. As well as starring in another Oscar-nominated movie, “Hidden Figures”, the actor stars in “Roxanne Roxanne,” a music industry movie presented at Sundance in January. He is set to film several major productions this year, including “Triple Frontier” with Tom Hardy and Channing Tatum, and “Alita: Battle Angel”, directed by Robert Rodriguez.

Damien Chazelle: back with Ryan Gosling

Recent Oscars success isn’t likely to stop this young filmmaker aiming even higher. After scoring success with “La La Land,” the filmmaker is expected to continue working on his fourth feature film, “First Man” about the legendary Apollo 11 space mission. The American director has reportedly once again picked Ryan Gosling for the lead role, playing astronaut Neil Armstrong, the first man on the moon in 1969.

Barry Jenkins: a contract with God

After a win for his movie “Moonlight”, the director is busy working on his next project, “A Contract with God”, based on a graphic novel by Will Eisner. Barry Jenkins has also directed an episode of “Dear White People”, a series focusing on racial tensions at a prestigious Ivy League college in the United States, which starts April 28 on Netflix. JB