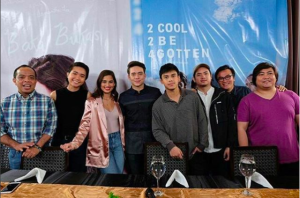 Due to insistent public demand, Cinema One Originals 2016 entries “Baka Bukas” and “2 Cool 2 Be 4gotten” will be commercially released this March.

Directed by Samantha Lee, “Baka Bukas” tells the tale of two female best friends, where one is secretly in love with the other. The film casts Louise De Los Reyes and Jasmine Curtis-Smith, with Curtis-Smith winning a best actress nod for her performance.

Lee says both films are a good reflection of today’s society, and how no one has to be of a certain age to learn about the LGBT community, or how it is to be a kid in today’s society. She also shared how the films have affected the lives of young people who are afraid to reveal their true selves, inspiring them to finally “come out.”

“We kind of built a community, people would message how they were encouraged to come out after watching the film. I feel like making this film is an effort to normalize the LGBT community in this country. There are a lot of people who are afraid to come out,” she said.

Meanwhile, “2 Cool 2 Be 4gotten” by Peterson Vargas is another gay-themed film about young boys set in the 1990s, depicting the struggles of being confronted with gender issues and love. The film casts Khalil Ramos, Ethan Salvador and 19-year-old Jameson Blake, who won his first acting award for the movie.

(A lot has been said about the two films being both LGBT-themed. But more than that, both are very relatable to people who are in their high school or college days, or to young professionals who fall in love with their best friends. And I think that’s one of the films’ elements with which the people mostly related to, though they’re not gays or lesbians.)