Five things to watch at this year’s Oscars bash 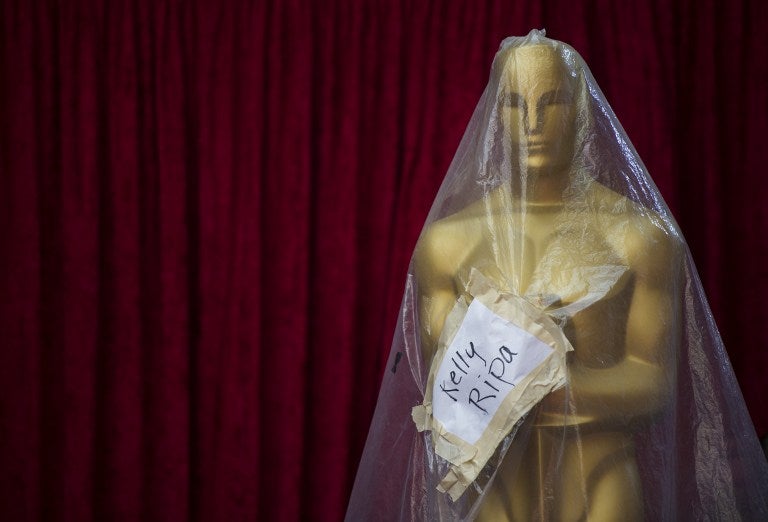 An Oscar statue with Kelly Ripa’s name is seen on the red carpet during preparations for the 89th Academy Awards in Hollywood, California on February 25, 2017. AFP

LOS ANGELES, United States — It’s no secret that “La La Land” is the big favorite to earn major Oscars glory on Sunday. But there are other stories sure to unfold on Hollywood’s biggest night.

Here are five things to watch for:

“La La Land,” Hollywood’s love letter to itself, heads into the Oscars with a record-tying 14 nominations.

The whimsical musical romance is favored to win the most coveted best picture prize, beating out fellow frontrunners “Moonlight” and “Manchester by the Sea,” as well as six other nominees.

The film has already nabbed many of the top honors — Golden Globes, Baftas, guild prizes — leading up to the Academy Awards.

Should 32-year-old Damien Chazelle walk away with a statuette, he would be the youngest director ever to win an Oscar.

Will Oscars be ‘Trumped’?

Given the tension roiling the country since Donald Trump was elected president, it is all but sure that Sunday’s ceremony will have a tinge of politics.

The gala already took a political turn after Iranian director Asghar Farhadi — nominated for best foreign language film for “The Salesman,” after his “A Separation” won in 2012 — said he would not attend the ceremony following Trump’s controversial travel ban targeting seven mainly-Muslim countries.

The film’s lead actress has also said she would snub the event, even though the travel order is currently on ice.

White House spokesman Sean Spicer said Trump likely would not watch the Academy Awards as he will be hosting the annual governors’ ball in Washington.

That does not necessarily mean, however, that the president won’t take to Twitter to react to any “Meryl Streep moment” — she hit out at Trump in a speech at the Golden Globes that won praise and criticism.

A miffed Trump reacted by calling her “overrated” — and Sunday might just be Streep’s chance to respond.

Streep: another win on the cards?

Streep received her 20th Academy Award nod this year for her starring role in “Florence Foster Jenkins,” besting her own record for the most acting nominations in Oscars history.

Should she win on Sunday, the 67-year-old actress will earn her fourth Oscar, tying her with Katharine Hepburn for the most Academy Awards in the best actress — leading and supporting — categories.

Oscars not so white

It has been a landmark year for diversity at the Oscars with African-American actors nominated in all the top categories.

The diverse slate of nominees will help the Academy of Motion Picture Arts and Sciences put to rest the #OscarsSoWhite controversy that has dogged the awards gala for the past two years.

However, a new Oscars hashtag — #OscarsSoMale — appears to be gaining steam, over the fact that a majority of speaking roles in films go to men.

Comedian and late-night host Jimmy Kimmel will preside over the Oscars for the first time, and critics will be watching to see how he pulls it off in front of a television audience of tens of millions.

Kimmel, 49, faces the stiff challenge of keeping the more than three-hour show — usually the most-watched non-sports telecast in the United States — upbeat in a year where no major surprises are expected and where the Oscars So White controversy seems to be a thing of the past.

“I’ve come to terms with the fact that someone is going to be disappointed in me at the end,” the emcee, who recently hosted the Emmys, told The New York Times in an interview published this week.