Tom Hiddleston takes a break from it all 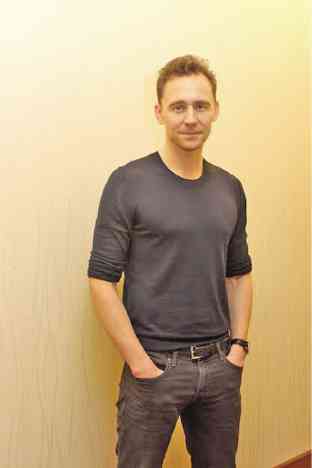 LOS ANGELES—“I have been working very hard for the last five or six years, back to back. I just needed to take a moment to catch up with myself a bit,” explained the usually busy actor, Tom Hiddleston, as to why he had not been working for the past few months.

Even though he doesn’t have to wear Loki’s tight leather costume these days, Tom looks fit, perhaps even slimmer than the last time we saw him in costume, long hair and all, on the “Thor: Ragnarok” set in Australia last October.

Tom donned a simple all-black Gucci ensemble, with shirt sleeves rolled up, complementing his trim physique in our recent encounter at The Ritz-Carlton in downtown Los Angeles.

“I was lucky enough to recently work with Gucci, who lent me clothes to wear on these occasions,” he said with a grin.

No one grins like Tom does—his entire face lights up in seemingly unabashed sudden joy.

Saying he’s been taking it easy at his London home “for the last four months,” Tom added, “The kitchen is looking like it needs a few repairs. I have been away from home for a while. It’s nothing major. I’m just having a breather.”

The second of three children of a Scottish physical chemist and a British arts administrator shared how he had been spending time away from sets. “I spend time with my family and friends.  I have been reading a lot. There is virtually no anxiety that can’t be cured by an hour or two of good reading.

“And I have just been doing my things and bits around the house. I’ve been away for a long time for about three or four years. Catching up with my good friends and my family has been really nice.”

The recent Golden Globe winner for TV’s “The Night Manager” interrupted his time off to promote “Kong: Skull Island,” a surprisingly enjoyable popcorn movie, thanks to Jordan Vogt-Roberts’ direction.

In his first major feature, Jordan pays homage to “Apocalypse Now,” “Godzilla,” “Jurassic Park” and monster movies, and crafts an entertaining commercial movie. This time, Kong is not the only monster in the story set in 1971 and shot in Vietnam, Hawaii and Australia.

The Wimbledon-raised actor, who turned 36 last Feb. 9, gambled on working with Jordan, whose only film directing credit was 2013’s “The Kings of Summer,” a coming-of-age comedy. He directed mostly TV series.

But Tom came on board after Jordan pitched his ideas for “Kong: Skull Island.” “I met Jordan in October 2014,” Tom recounted. “He came down to Nashville. I was getting ready to play Hank Williams in ‘I Saw the Light.’ We spent Friday night in a diner, just talking about the movies we loved as children—‘Indiana Jones’ and ‘Jurassic Park.’

“Jordan’s pitch was brilliant. It was the idea of making a Kong movie that feels like an old-fashioned adventure to a deserted island. But it also has this fresh, contemporary edge with political and social resonance, wrapping up this theme about the power and majesty of nature.

“We’ve been developing this together for two years, going through several drafts of the script, other actors coming on board, dreaming up this film for a long time. Jordan has done a wonderful job.”

Still on directors, Tom is also impressed with Damien Chazelle’s achievement in “La La Land.” He was glad to personally congratulate the filmmaker. “I was happy to be able to tell Damien that in person.” 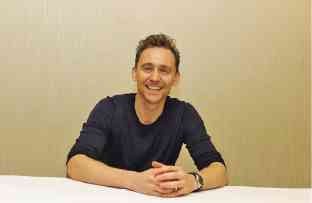 “How hard have I pursued anyone (a director)?” Tom asked aloud. “I was not shy about letting Kenneth Branagh know how much I wanted to play the part of Loki for the first time.”

Whether he’s working with Kenneth or Jordan, the man who dated singer Taylor Swift last year said that music always inspires him on and off the set.

Said Tom, who studied the classics at  University of Cambridge (he also attended Eton College and the Royal Academy of Dramatic Art): “There’s a phrase that sticks in my mind, by renaissance essayist Walter Pater, who said, ‘All art aspires to the condition of music.’ Music is the highest art form, the most immediately evocative and inspiring. It has the power to change our internal makeup.

“If you have had a stressful day, and you listen to beautiful music, it can lift you out of your anxiety and it can heal and transform. I have always loved all kinds of music. In fact, whenever I play a character, I always have a different playlist. For this (‘Kong’), I listened to a lot of scores and early 1970s Rolling Stones and Creedence Clearwater Revival.”

He’d “love to be a better musician. I am not technically adept. I am a competent rhythm guitarist, but only because of playing Hank (Williams, in ‘I Saw the Light’). I play the piano for myself when I have the time.”

On his “Kong” costar Brie also joining the Marvel Cinematic Universe as Carol Danvers/Captain Marvel in “Avengers: Infinity War,” Tom sounded enthusiastic: “We have talked about making those films. I do think Kevin Feige (producer) and the producers at Marvel Studios are smart about invigorating every character with a unique tone.

“So Thor (Chris Hemsworth) and Loki have this thing, and I am sure Captain Marvel will have her own backstory.  When Brie works with the director, they will find a common language.  I am looking forward to it as much as you are.”

At our screening of “Kong,” the audience cheered the relevance of John Goodman’s line, “This is the craziest time in Washington,” amid the buffoonery of the Trump administration. Asked about his own “craziest time,” Tom answered, “Difficult to pick one —nothing stays the same, nothing stands still.”

He alluded to this Trump era: “This point in history is destabilizing for lots of us because it’s difficult to truly determine what is true and what isn’t. But inside the ambiguity, we have to be kind to each other as we move forward.”

Blessed with a soothing, rich voice, Tom said he’d jump at the chance to voice an animation movie character.

Tom’s reading of E. E. Cummings’ poem, “May I Feel Said He,” in Allie Esiri’s app, “The Love Book,” is also drawing similar reaction. “It’s incredibly sexy, you almost have to go into a quiet room … it’s almost pornographic!” Allie was quoted as saying.

“A friend of mine asked me if I wanted to read some poetry with great actors—Helena Bonham Carter, Bill Nighy, Damian Lewis and Helen McCrory,” he said about the app available on iTunes. “I love poetry.  Poetry is such a beautiful and ancient art form, and it’s very simple. Spending a couple of days reading poetry aloud is very easy.”

Someday, that voice will be heard again in a play. “I love the theater,” he stressed. “It will always be a part of my life. I do have some plans to go back. For as long as I am an actor, I will always have a contact with the theater. It’s not something I feel like I will ever abandon.”