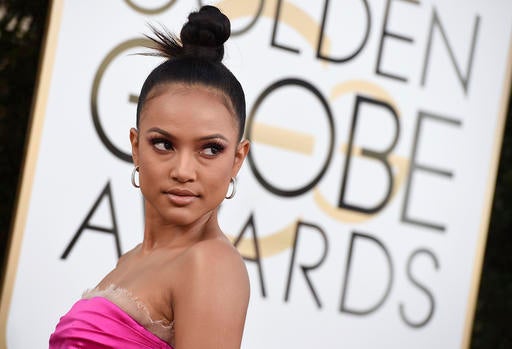 In this Sunday, Jan. 8, 2017, file photo, Karrueche Tran arrives at the 74th annual Golden Globe Awards at the Beverly Hilton Hotel in Beverly Hills, Calif. A judge Friday, Feb. 17, 2017, ordered R&B singer Chris Brown to stay away from his ex-girlfriend, Tran, after she accused him of repeatedly threatening her. (Photo by Jordan Strauss/Invision/AP, File)

LOS ANGELES—Troubled singer Chris Brown has been ordered to stay away from an ex-girlfriend, model Karrueche Tran, after she said he punched her and threatened to kill her.

In documents made public Tuesday, a Los Angeles court granted a restraining order requested by Tran, with Brown facing arrest if he comes near her.

Tran, who has had an on-off relationship with Brown, said that he punched her in the stomach and pushed her down the stairs several years ago but that she did not call the police.

The model, who has also appeared in television series, said she requested the restraining order as Brown had recently sent her threats by text message.

“He told a few people that he was going to kill me. He said if no one else can have me, he’s gonna ‘take me out,'” she wrote.

Brown, who rose to fame at a young age with his R&B voice and later rap, has become notorious for allegations of abuse.

READ: Chris Brown, a singer better known for his violence

He was convicted of beating superstar Rihanna, then his girlfriend, before the 2009 Grammy Awards, forcing the pop singer to miss the music industry’s annual gala.

Last year, he was arrested on suspicion of assault with a deadly weapon after a standoff with police.

A woman had called for assistance in that incident, but Brown’s lawyers insisted she had set him up amid a feud.

Read Next
No right age to come out of closet
EDITORS' PICK
High inflation: Your P1 is now worth only 87 centavos
Geek out at TOYCON 2022 powered by Smart Signature
Unemployment rate up to 6% in May
UK’s Boris Johnson will resign, BBC reports
High-risk pregnancy: Reducing your risk is in your hands
House energy committee chair Arroyo bats for cheap electricity
MOST READ
Suspect in grisly killing of missing woman in Bulacan arrested
Kim Atienza’s daughter flaunts bikini body in response to critics of her ‘revealing photos’
Number of active COVID-19 cases in PH breaches 11,000
Ex-Defense chief Lorenzana is the new BCDA chair
Don't miss out on the latest news and information.