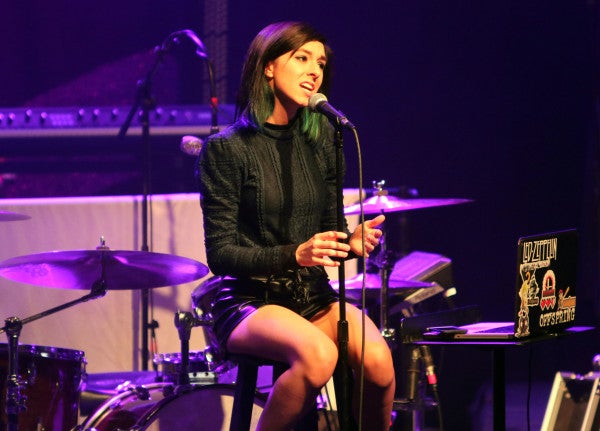 In this Mar. 2, 2016 file photo, Christina Grimmie performs as the opener for Rachel Platten at Center Stage Theater, in Atlanta. Florida authorities say “The Voice” star Grimmie is in critical condition after being shot at a concert venue in Orlando by a suspect, who then fatally shot himself after being tackled by the singer-songwriter’s brother. AP

Despite her harrowing death from the hands of a lone assassin last June, Christina Grimmie has left an everlasting souvenir to her fans.

Marcus, the elder brother of the late singer-songwriter, introduced Christina’s single at the “Elvis Duran and The Morning Show” on Thursday. The pop hymn, titled “Invisible”, will be included in the singer’s upcoming posthumous album.

“I ain’t gonna let it go / ‘Cause this been going on too long,” she sings on the lead track. “I won’t be another ghost / No, I won’t be invisible.”

Marcus said that prior to her demise, Grimmie has written and sung over 50 compositions. “Since about 2015, she’s been just grinding it out, writing songs, and has about 50 to 60 songs that are finished vocally, and she’d just been putting in hard work,” he said.

Marcus further shares, “It’s unbelievable. No one that I have ever met has worked as hard as she has, and that’s for sure. We’re very excited to be doing this the way she wanted it done.”

All the proceeds of his sister’s album will be used to establish a foundation in her memory. As of the moment, the Grimmie clan has yet to iron out the focal advocacy of the foundation.

“As a lot of people know, she was super passionate about breast cancer awareness, animal safety, anti-bullying. There are so many things. So, we are just figuring out what’s the best way to allocate the funds,” Marcus concluded.

Kevin James Loibl fired his pistol at Christina while she was signing autographs after a concert in Orlando, Florida. Her killer shot himself afterwards.

Christina finished third in the sixth season of the hit singing contest TV show “The Voice” in the United States. JB

In grief over Christina Grimmie killing: Why?