Six Filipino-American youngsters channeled their world-class music to a popular all-female pop group, which has invited them to join its upcoming concert in the Philippines.

The Filharmonic, an a capella group consisting of six Filipino-American males, sang a polished and softer version of Fifth Harmony’s “All in My Head,” which was uploaded on its YouTube channel last month.

Its flawless cover of the song earned the kudos of “Fifth Harmony” member Lauren Jauregui, who shared their video on her Twitter account. 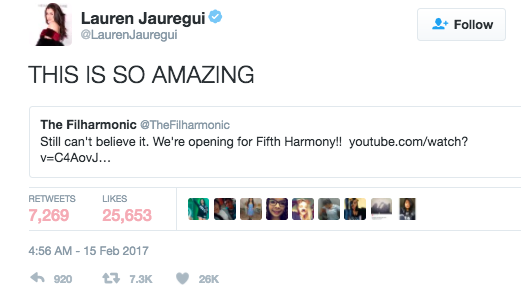 Lo and behold, the Filharmonic will join Fifth Harmony on stage during its 7/27 Tour in Manila on April 5 at the Mall of Asia Arena.