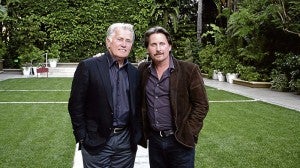 MARTIN Sheen and Emilio Estevez during our interview. photo by RUBEN V. NEPALES

LOS ANGELES – While we were interviewing the father and son team of Martin Sheen and Emilio Estevez for their movie “The Way,” the former’s film, “Apocalypse Now,” and its tumultuous shoot in the Philippines came up. Martin had brought his entire family – wife Janet and children Ramon, Emilio, Charlie and Renee – to the Philippines to star as army assassin Capt. Benjamin Willard in what would be hailed as Francis Ford Coppola’s masterpiece.

The troubles that plagued Coppola during that movie’s production in the Philippines have been extensively written about – the typhoon that halted filming for over a month, the budget problems and an overweight Marlon Brando who was supposed to be an emaciated leader, among other things.

Coppola’s lead actor, Martin, was having problems as well. Martin’s alcoholism had affected the family. Emilio, only 14 at the time, was quoted as saying of his dad, “I hated him when he got drunk, because he’d get violent.”

To make matters worse, Martin had a heart attack. Fortunately, it wasn’t a major one; he returned to the set after a few weeks. He rejoined the cast that included an impressive list of actors who were only starting their careers then: Laurence Fishburne, Harrison Ford, Sam Bottoms, Frederic Forrest, to name a few. Also in the cast were Brando, Robert Duvall and Dennis Hopper.

Today, Martin and Emilio have become close collaborators at work. Emilio directs his dad in “The Way,” a profoundly moving film inspired by the Camino de Santiago, the famed pilgrimage route that starts in the French border and ends in Galicia, Spain, where the sacred relics of St. James the Apostle are believed to be buried. “The Way” (Emilio also acts in it) deserves a separate column, so we’ll write about the film in the future.

On this afternoon, father and son are seated together for the interview. Martin, sober for many years and a devout Catholic, listened intently as Emilio recalled the family’s challenging times in the Philippines. “It was a very difficult time,” Emilio began. “It was chaos and we had very little supervision. On ‘Apocalypse Now,’ much to my mother’s horror, I became one of the soldiers as an extra in one of the battle sequences. We had three weeks of training and three weeks of shooting. I was dressed in full military gear and I had a machine gun. My mother was like, ‘Oh, no!’” 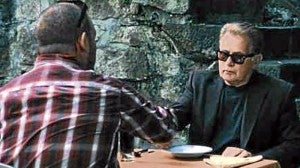 TODAY, Martin and Emilio have become close collaborators at work.

“But it was a great experience for me to be on the set, watching Coppola and his cinematographer (Vittorio Storaro) work,” said Emilio, who directed his dad for the first time in “The War at Home.” His other directing credits include “Bobby” and several TV series episodes. “On one hand, just watching how this production was put together was special. On the other hand, it was complete madness.”

Emilio cited the documentary “Hearts of Darkness: A Filmmaker’s Apocalypse,” which chronicled the film’s epic size troubles. “You’ve seen the behind-the-scenes making of that film,” he said. “It’s all very accurate. There was no supervision because my father was trying to stay alive and my mom was trying to keep him alive. That’s no exaggeration. It was craziness.”

Martin, for his part, admitted: “I put an awful lot of pressure on Emilio, his sister and brothers because the longer the film took, the more it took them out of their regular lives. Originally, we were supposed to be in the Philippines for only four months, which we could have handled because it would only be from spring to the summer of 1976. Then the kids would have gone back to school in time. But the storm knocked us out and delays in production and any number of things kept pushing the film back.”

The Sheen patriarch, now 71, confessed, “I owe a great deal to Emilio’s mother, my wife Janet, who was a pillar. She really helped me through the experience in deeply personal ways. It was not an easy time but, mind you, if someone told me going in, ‘This is going to happen to you,’ I would have said, ‘No, thank you.’ I would have passed – but I have no regrets about having gotten through the experience because it strengthened me. It allowed me to identify myself in so many personal ways that otherwise would not have been possible.”

He added: “I was on the production for a year and almost four months, all told. The production crew was there even longer because they started before me. I was a replacement, as you may know (for Harvey Keitel). The experience taught me that there’s no substitute for preparation.”

The veteran actor, saying it was “a memorable experience,” explained some of the challenges playing Capt. Willard as he hunts down for Col. Kurtz in a boat. “I was playing a soldier during the Vietnam War,” he said. “I was 36 at the time. I was a bit too old to be running around in the jungle. I believe I was the oldest guy on that boat. Laurence was 14. Sam (Bottoms) was 21. I really had to adjust considerably.”

To this day, Martin vividly recalls the storm that shut down the already beleaguered shoot. “I remember the first typhoon that hit us and drove us home. The typhoon killed about 240 people. I’ve never been in a situation like that before. We had to be rescued and brought home. We were given about six weeks to reorganize and go back. So it was like, I came back like MacArthur. But before that, I took swimming lessons when I [got] home… because I realized that I’m on a boat for 80 percent of the movie. There were no life jackets. I had to learn an awful lot about how to be a soldier and get in really good shape. That’s what I focused on.”

Like Emilio, Laurence Fisburne was only 14 at the time. He had lied about his age to get a role in Coppola’s movie. Martin is close to Laurence, who became friends with Emilio. “All my memories of Laurence Fishburne are precious. I adore him. He was a child. He was 14 when we were doing ‘Apocalypse.’ His mother, who was a teacher from Brooklyn, was there, too. She organized the school for Emilio, Ramon and all our children, Larry (Laurence) as well. So that was one thing that we started there. To watch Laurence grow since then has been a remarkable experience. To know someone in the industry that young, to watch him grow as a human being and then as a major actor is extraordinary.”

Emilio and Laurence have remained the best of friends. Martin proudly said, “Laurence came to do ‘Bobby’ for Emilio under some difficult circumstances because Laurence had another commitment. Laurence pushed the other project back so he could come and work with Emilio. I adore Laurence.”

In parting, Martin said, “I love your country and I’m going to see Manny Pacquiao in a few days. He’s having a fundraiser which I am honored to be the emcee for.”

We heard that Pacman was not able to attend that event which launched a fundraising drive of The Manny Pacquiao Foundation. But Martin reportedly still hosted the event.