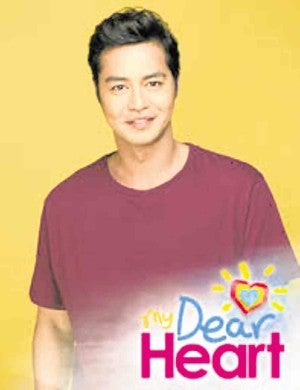 When Zanjoe Marudo first made his stellar bid, his handlers “positioned” him in macho roles and some horror-tinged projects. He was tall, buff, and we approvingly noted that he wasn’t the usual “generically tisoy” starlet, of which we already have too many.

Later, he went into comedy by way of the “Banana Split” TV comedy revue, and acted in the “slightly sexy” series, “Tubig at Langis.”

Despite these varied initiatives, however, we felt that Zanjoe still had to make his definitive mark on the performing scene, and hoped that he would soon find his “niche.”

Well, he finally did—in “Dream Dad,” he was cast as child discovery Jana Agoncillo’s adoptive father, and both of them scored with viewers.

The series became popular due to the unlikely bond that the two lead characters were able to forge, each helping the other to get over past hurts and disappointments.

The 2014-2015 show’s success has apparently clued producers in on Zanjoe’s “emerging” strength, which is the depiction of a man who’s strong on the outside but capable of child-friendly sensitivity and nurturing love.

The “lesson learned” is evident in Zanjoe’s 2017 starrer, “My Dear Heart,” where he once again portrays a man who has a soft spot for the little girl (Nayomi “Heart” Ramos) he ends up adopting.

If that sounds too similar for comfort, the twist here is that Zanjoe’s character doesn’t know it (but viewers do) that “Heart” is in fact his biological offspring.

How could this have happened? Well, he got his rich girlfriend pregnant, her mother (Coney Reyes) nixed the relationship and ended it, he lost track of her whereabouts, she gave birth without his knowledge, the newly born infant was spirited away, the kidnapper “somehow” handed it over to him—etc.!

That may sound “logically impossible,” but in the fantasticating world of TV storytelling that may not be a total put-down!

In any case, one hit “daddy” series deserves another, so Zanjoe and his storytelling team are pumped and primed to come up with another “sensitive” winner.

One thing that’s sure, though, after “My Dear Heart,” the actor had better come up with a really different kind of story and format, or else he will be the victim of his own overly repeated success—translation: excess!

Having said all that, it’s pertinent for us to note that, between “Dream Dad” and “My Dear Heart,” Zanjoe has grown as an actor, and is more committed to the role he’s currently playing.

As for new find Nayomi Ramos, she similarly clicks with the viewing public—but she could be playing her “cute and cheerfully chatty” hand a mite too enthusiastically.

She’s being made to mouth dialogue that’s too “wise” and wordy for a tyke her age, and should talk more simply, briefly and naturally.

In addition, she’s relentlessly too “Pollyanna” in projection, eternally upbeat and generous despite her grave heart ailment. A little less pluperfection and utter indomitability of spirit would be more natural and believable.

Finally, Nayomi’s big break via “My Dear Heart” reminds us that Jana Agoncillo was similarly blessed in “Dream Dad,” and was clearly headed for stardom. However, her follow-up stellar vehicle has still to materialize.

So, before she gets too old to savor her child stardom to the fullest, as she deserves to, Jana should be given another big, bright, stardom-affirming project this year. Focus on her now, and Nayomi can get her big, stardom-affirming break next season. Makes sense?

Read Next
Smitten celebs’ blossoming romances
EDITORS' PICK
Over 3 Million worth of prizes to be won at Smart Padala’s SENDali Manalo Promo!
Acer starts the year off strong with the Aspire Vero National Geographic Edition
Uproar over no vax, no ride policy: Maybe it’s time for gov’t to say sorry—Bello
97% of COVID-19 beds at PGH currently occupied
Japan brings back virus restrictions over Omicron surge
Gear up and get ready to play with Yamaha Mio Gear
MOST READ
1Sambayan names 7 aspirants in its 2022 Senate lineup
Emma Stone calls Andrew Garfield a ‘jerk’ after he ‘lied’ about his ‘Spider-Man: No Way Home’ appearance
Guevarra to Acosta: Obey rules on unvaccinated
PH to import 60,000 tons of fish to cover shortage
Don't miss out on the latest news and information.