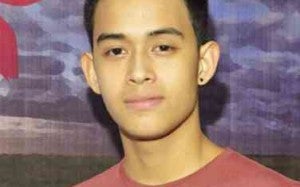 An enraged Diego Loyzaga lashed out at his father, Cesar Montano, on his Instagram account that sent the online community abuzz.

In a post on Tuesday, Loyzaga said his dad had threatened to put him under police custody because of “drug use.”

Loyzaga admitted that he had submitted himself to a series of drug tests, which all had negative results, and yet, he said, his father insisted that he was using drugs.

The Star Magic artist also said he was speaking not only for himself but also his siblings.

Loyzaga also let out his pent-up sentiment about being “unwanted” by his father ever since he was a child.

“SANA LUMABAS LAHAT NG BAHO MO. Duwag!! – written by the UNGRATEFUL child who was denied by his father. So really am i an UNGRATEFUL “CHILD” because to him i am not even his child,” he said.

In another post, the 21-year-old actor reposted his father’s Instagram post that said he [Cesar Montano] already paid for the tuition of his daughters with estranged wife Sunshine Cruz, showing in the photo documents and checks as proof that he was doing his fatherly obligations to his children.

Loyzaga blasted him saying it was his obligation to send his children to school and that it was just right for his siblings unlike him, who “never got a taste of a single child support from his father since he was born.” Because of this, he said he had the right to get mad.

In other rants, he wrote:

Besides his rants showing his hurt feelings, Loyzaga shared a strange message saying that if he goes out missing, it only meant one thing.

Hacked account
Because of the sudden outburst of the Kapamilya actor, many netizens were quite hesitant to believe it was indeed him writing the posts since they were written in Filipino. He grew up in Australia and is presumed not to speak the language quite well.

However, Loyzaga clarified that his account was not hacked and that, since he grew up with his mom (former actress Teresa Loyzaga) in Australia, he was used to speaking the local language.

In the end, he sent out a direct message to his father:

He also said that he hoped all his father’s dirty linen would come out. “SANA LUMABAS LAHAT NG BAHO MO. Duwag!”

Cesar Montano has been delegated by Pres. Rodrigo Duterte to head the Tourism Promotions Board under the Department of Tourism, which explains his zealous support for the administration’s deadly war on drugs.