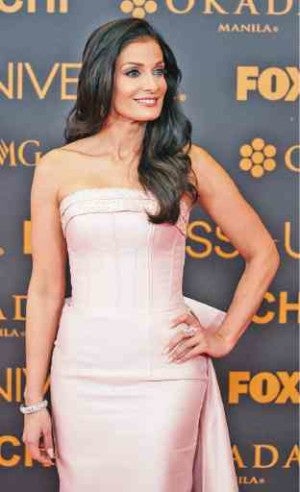 Even before Dayanara Torres flew in last Jan. 23 to serve as a judge in the 2016 Miss Universe beauty tilt, we had already clarioned and cheered her plan to reestablish her strong “Philippine connection.”

Aside from choosing and crowning the next Miss U, Dayanara has “come home” to resume her local entertainment presence and career, which she focused on for six productive years in the ’90s, before she opted to go more “international” on the US and Latin American show biz scenes.

Since she’s retained her stellar looks and charisma, Dayanara should do well in her local comeback bid, which could be launched by way of a big-screen showcase.

She delighted her local “loyalists” even more upon her arrival when she sometimes “lapsed” into Filipino in answering reporters’ questions.

She shouldn’t have a hard time reconnecting with and exciting her fans again—if her relaunching “vehicle” is chosen savvily and well.

This early, Dayanara’s fans are most pumped up by the prospect of her comeback screen team-up with Aga Muhlach—but, it’s iffy if the still-popular male lead is “physically ready” for the make-or-break assignment.

The last time we watched him on TV as a judge on the recently concluded “Pinoy Boyband Superstar” tilt, Aga still looked a bit pudgy.

But, if he works hard to get into “shooting trim” for another month or two, it could happen.

We join Dayanara-Aga fans in hoping really hard for that to transpire because their projected film’s success would be a welcome victory for both of them, since Aga has also been on the show biz shelf for far too long.

However, even if both Aga and Dayanara are “camera-ready,” that’s just half the battle won, because the bigger deal is the material that they’ll be working on in their comeback bid—as well as the creative artists who can help them make it a popular and critical success.

Since both stars are in their 40s, their new costarrer should be appropriately “more mature.” The film type is up for discussion, but added depth, heft and significance in terms of plot, character and theme should be a given.

Another possibility for Dayanara’s comeback bid is a solo TV salvo without Aga. Perusing Dayanara’s filmography and TV credits, we see that a projected small-screen outing for her is a new “chapter” on “Ang Probinsyano,” with her playing “Mariana dela Riva.”

Is this just somebody’s exercise in wishful thinking, or is this already in the pipeline? We’ll soon find out.

All told, however, the Dayanara-Aga movie, if pulled off well, would make a bigger splash, so we hope that it will win out.

We don’t know if Dayanara has kept her dancing skills in tip-top shape—but, if she has, a big dance showcase on TV could be another way for her comeback bid to go.

She was once known as “Asap’s” “dancing queen,” due to her hot-to-trot numbers on that program, and on her own TV show, “Eezy Dancing.”

So many comeback options, all of them promising. Which one will the local entertainment scene’s decision-makers bless, fund and green-light first?