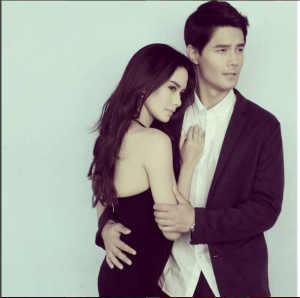 Is there no “forever” now for Kapamilya stars Erich Gonzales and Daniel Matsunaga?

Just as when many thought that they were among the few more stable show-biz pairs , it’s looking like Kapamilya stars Erich Gonzales and Daniel Matsunaga are in troubled waters, as is very evident on the former’s social media accounts.

Recently Gonzales did a drastic move by deleting all traces of Matsunaga on her Instagram account. The couple’s fans can no longer experience the thrill of looking at their photos together. Gonzales’ Instagram is left with nothing more than her solo adventures.

The Kapamilya couple went public with their relationship back in 2015 and since then, many had thought they were altar-bound. Now they’re asking, “Are they indeed breaking up?”

To finally give concerned fans and bashers alike a glimpse of the real deal, the actor revealed via a post that they were indeed going through “some personal things.” He did not elaborate.

“Guys I would like to ask a favor pls…we are talking and going through some personal things…all we need is your support and love…not people talking trash… we love you all with no limit and we just need some respect and time. Thank you. God bless you guys…,” he said. 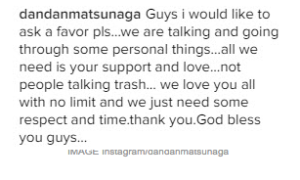 Read Next
Former Miss Universe Dayanara Torres to make ‘ASAP’ comeback
EDITORS' PICK
SSS: Members on home quarantine due to COVID-19 can apply for sickness benefit
Mobile COVID-19 vaccination for commuters, transport workers set at PITX
PH to send 584 athletes, 161 officials to Vietnam SEA Games
Gear up and get ready to play with Yamaha Mio Gear
Kalinga, Ifugao, Mt. Province, N. Samar will be under Alert Level 4 from Jan 21-31
Acer starts the year off strong with the Aspire Vero National Geographic Edition
MOST READ
Imelda Marcos trends on Twitter after octogenarian jailed for allegedly stealing mangoes
Mayor Vico counters vice mayor: ‘Did I say anything about his family?’
PH 51st on list of world’s most powerful militaries
‘Unbelievable!’ Pacquiao hits DA’s plan to import 60,000 MT of fish
Follow @CAbanillaINQ on Twitter
Don't miss out on the latest news and information.