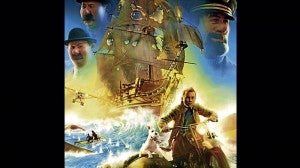 “THE ADVENTURES OF TINTIN.” With its release, Spielberg’s reputation as a peerless storyteller remains rock-solid.

Daniel Craig hasn’t always been the dashing superspy, James Bond. In fact, long before he started driving Aston Martins and asking for shaken-but-not-stirred martinis, the British actor thrived in brooding bad-boy roles (“The Mother,” “Munich”) that established him as a character actor with daring and depth.

So, it didn’t come as a surprise when we heard that Craig was going to lend his voice to the bad-guy role in Steven Spielberg’s buzzed-about performance-capture animation, “The Adventures of Tintin” (showing on Nov. 30), in which the legendary director teams up with the similarly iconic Peter Jackson, who’s onboard as producer.

In Spielberg’s gloriously realized screen version of the 1940s comic-book series, Craig is cast as Ivan Sakharine, the powerful descendant of a 17th century pirate who’s raring to get his hands on sunken treasure.

But, clues to its whereabouts can only be found in parchment scrolls hidden in three identical toy models of a sailing ship called the Unicorn—one of them is in Sakharine’s possession, and another has just been purchased by investigative journalist, Tintin (Jamie Bell)! But, where could the third scroll be?

With the help of his loyal pooch, Snowy, Tintin finds the answer when he embarks on an adventure that leads him to Sakharine’s lair on a boat manned by the constantly inebriated Captain Haddock (Andy Serkis, in another outstanding motion-capture portrayal)—who holds the key to finding the missing treasure! But, getting all three scrolls together is another problem that requires more than just Indiana Jones-style derring-do and action-movie gumption to solve.

True, sure-fire hits are no longer as easy to predict as they used to be: For instance, early this year, Pixar’s 16-year winning streak that began in 1995’s “Toy Story” ended with the astonishingly uninspired sequel of “Cars”—and, even Jackson himself stumbled in 2009’s less-than-beautiful “Lovely Bones.”

But, we’re happy to note that, with the release of “The Adventures of Tintin,” Spielberg’s reputation as a peerless storyteller remains rock-solid. As his fast-paced adventure flick aptly demonstrates, the director can turn whimsical ideas into “relatable” tales that throb with edge-of-your-seat action, and resonate with viewers.

More than that, the director is likewise no slouch at conjuring up lifelike and almost tactile images that “stretch” the cinematic medium’s spatial dimensions. And, he tackles universal themes without sacrificing his film’s ability to entertain.

The production’s technical polish is just icing on Spielberg’s scrumptious cake: As he paces the production’s quirky vocal performances, Bell’s inherent likability grounds his character’s stubbornness and never-say-die conviction. Serkis complements his performance with a deliciously idiosyncratic turn as the young protagonist’s alcohol-addicted “partner in crime.”

As for Craig, in choosing to do away with some actors’ penchant for florid, larger-than-life portrayals, he creates a nutty character that’s more sneeringly sinister and less cheeky than we’re used to seeing in animated features. He doesn’t play to the peanut gallery—and proves there’s more to a contravida than obnoxious posturing!