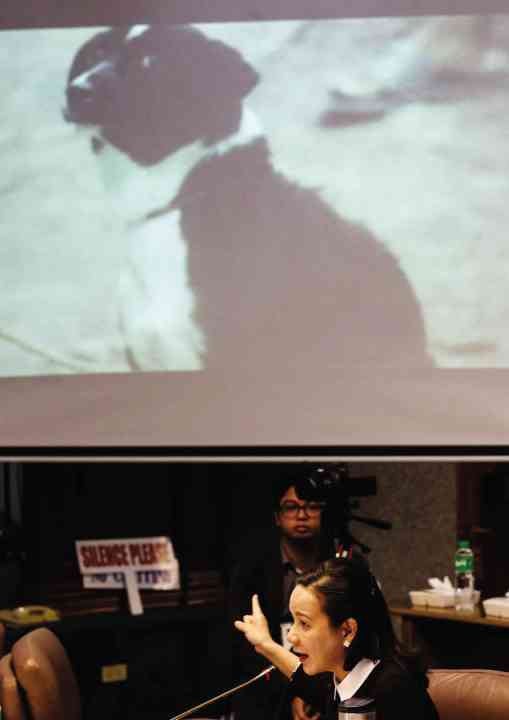 Clip of controversial scene from “Oro” (above). Sen. Grace Poe during the Senate hearing —LYN RILLON

Filmmaker Alvin Yapan has apologized for butchering a dog and eventually showing the act in “Oro,” his controversial film entry to the 2016 Metro Manila Film Festival (MMFF). He, however, proposed for the creation of a grievance committee that will “uphold the interest of filmmakers.”

Actress Nora Aunor decried the disrespect she allegedly experienced from Yapan and the production team of “Oro.” Aunor was supposed to play the lead role, but the producers opted to drop her from the cast.

Actress Boots Anson-Rodrigo said she supported the changes in the MMFF’s structure and goals, but said that “they should not be enforced too drastically.” She also stressed that “quality should be infused in films that are considered ‘commercially viable.’” Rodrigo is the chair of the Movie Workers’ Welfare Foundation (Mowelfund), one of MMFF’s beneficiaries.

The group running the MMFF should include “not just film lovers,” but also teachers, tricycle drivers, mothers and cinema owners to ensure that the interest of all sectors would be upheld, said Sen. Grace Poe, chair of the committee on public information and mass media.

These were among the topics discussed on Tuesday during the Senate hearing attended by actors, filmmakers, movie theater operators and representatives from film-related government agencies. Senators Sonny Angara, Joey Villanueva and Vicente “Tito” Sotto III were also present.

The hearing was held to discuss burning issues related to the controversial annual film festival, as well as to determine whether there was a need to come up with another MMFF in May exclusively for independent films, as proposed by Sotto through a Jan. 17 resolution.

However, what elicited a reaction from most people during the four-hour hearing was the discussion on the killing of the dog in “Oro.” Poe instructed Yapan to apologize “to people who were affected by the incident.”

“Some people might say it’s such a shallow issue and shouldn’t be discussed in a Senate hearing, but many are unaware that a law (promoting the humane use of animals in media) exists,” Poe pointed out. The Animal Welfare Act of 1998 requires a production outfit to secure a permit to ensure the safe use of animals in films.

Yapan did apologize, but said that the killing was merely “a filmmaker’s reaction to the heartless killing of human beings that is currently happening.” He expressed disappointment that people seemed to be reacting more to the dog’s death, rather than that of the four miners depicted in “Oro.”

Yapan then suggested for the MMFF executive committee (Execom) to create a grievance committee that would uphold the interest of participating filmmakers.

Film Development Council of the Philippines chair Liza Diño, who was the first to raise the issue of the dog’s death to “Oro” producers, said her agency has consulted the Bureau of Animal Industry (BAI) on the issue.

Diño said she learned that under the law, there was only one tribe in the country permitted to kill dogs, and that it was also required to secure a permit. “This tribe in Tagaytay does not eat dogs, but kills them as part of a ritual,” she explained.

Once a permit is secured, the BAI will send an accredited veterinarian to monitor “the humane use of animals on the set.” She added: “To prevent this incident from happening again, producers should be made aware of the existing law … It only costs P100 to secure a permit.”

Meanwhile, Movie and Television Review and Classification Board (MTRCB) chair Eugenio Villareal, explained that the MMFF was not “a government agency, but merely an ad hoc activity.”

He proposed the creation of “a national film promotions act, wherein all stakeholders will be given a chance to speak.” He added that the law should also indicate the film quota or promotion measure, “where the current festivals can piggyback on.”

As a response, Sotto promised to draft a national bill to support these.

Execom member Ed Cabagnot suggested the inclusion to the bill of five important points concerning cinema operators. “The first-day-last-day rule should be removed. Local films should be given at least four days in cinemas,” he said. “Also, they should open not on a Wednesday but during weekends, when they get the most number of viewers.”

Cabagnot also said discounted tickets for students and senior citizens should be guaranteed. He then said that the “one-title-per-theater” rule should be removed since it was “prone to abuse.”

“Lastly, there should be a massive audience development program so we can expect sold-out screenings of films as beautiful as ‘Sunday Beauty Queen,’” said Cabagnot. The documentary by Baby Ruth Villarama was declared the festival’s best picture.

In conclusion, Poe said that instead of creating another MMFF exclusively for indie films, she would order the creation of a technical writing group that would gather all of the stakeholders’ suggestions.

“Let’s not limit the MMFF to Metro Manila, let’s make it national,” Angara said, adding that representatives of local government units would be invited to attend the next hearing. He also said the Senate would support the proposed film quota and push for incentives given to local and foreign film producers. “All these things will result in the expansion of that small space.”