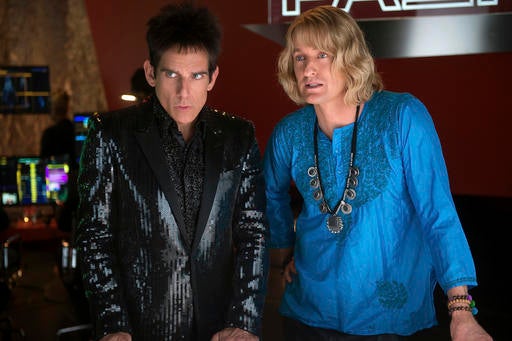 In this image released by Paramount Pictures, Ben Stiller portrays Derek Zoolander, left, and Owen Wilson portrays Hansel in a scene from, “Zoolander 2.” The film received nine nominations for the 37th annual Razzie Awards on Monday, Jan. 23, 2017, including one for worst worst picture. The awards will be announced on Feb. 25. (Wilson Webb/Paramount Pictures via AP)

“2016 was so overfull of bad movies that we had to expand every category from the usual five contenders to six,” organizers said in announcing this year’s crop of nominees.

The other Worst Picture contenders are “Dirty Grandpa,” “Gods of Egypt,” “Hillary’s America: The Secret History of the Democratic Party” and “Independence Day: Resurgence.”

On the acting front, Robert De Niro, Johnny Depp, Megan Fox, Tyler Perry, Julia Roberts, Naomi Watts and Shailene Woodley were among stars given the dubious honor of being nominated for a Golden Raspberry.

The nominees in eight of nine categories were chosen in an online vote by 1,014 voting Razzie members from 49 US states and 24 countries.

The nominees for Worst Screen Combo were selected by thousands of users of the review aggregator website Rotten Tomatoes.

The winners will be announced on February 25, the eve of the Oscars.

The Razzies were created in 1980 as an antidote to Hollywood’s star-studded back-slapping annual awards season, which this year climaxes on February 26 with the 89th Oscars.