Premiere of ‘A Dog’s Purpose’ canceled amid treatment issue 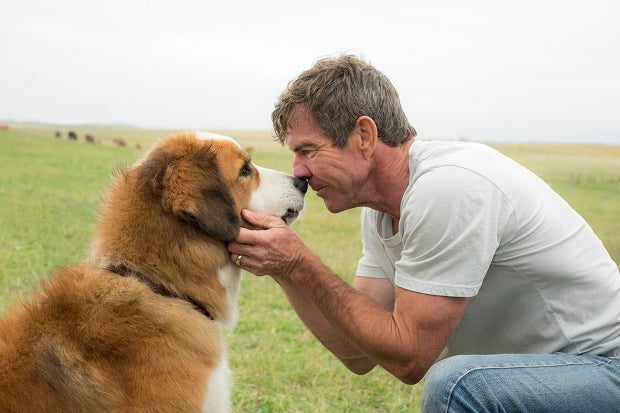 This image released by Universal Pictures shows Dennis Quaid with a dog, voiced by Josh Gad, in a scene from “A Dog’s Purpose.” A spokesman for American Humane said Wednesday, Jan. 18, 2017 that it has suspended its safety representative who worked on the set of the film when a frightened German shepherd, not shown, was forced into churning waters. AP

LOS ANGELES — This weekend’s premiere of “A Dog’s Purpose” has been canceled following the release of a video that appears to show a frightened dog being forced into churning water during production of the film.

TMZ published the video Wednesday showing a man struggling to put a dog into a pool of rushing water while the animal fights to stay out.

They say in a joint statement that Universal decided to cancel the premiere because Amblin’s review of the video is ongoing and they don’t want “anything to overshadow this film that celebrates the relationship between animals and humans.”

“While we are all disheartened by the appearance of an animal in distress, everyone has assured us that Hercules the German Shepherd was not harmed throughout the filmmaking,” the statement said.

The companies say the film will be released nationwide as scheduled Jan. 27.

W. Bruce Cameron, who wrote the novel on which the film is based, says the events in the video don’t reflect what he saw when he visited the set in person.

“The ethic of everyone was the safety and comfort of the dogs,” Cameron wrote in a Facebook post Friday.

“The dog was not terrified and not thrown in the water,” he continued. “When he was asked to perform the stunt from the other side of the pool, which was not how he had been doing it all day, he balked. The mistake was trying to dip the dog in the water to show him it was okay.”

People for the Ethical Treatment of Animals called the cancellation of the premiere appropriate after earlier calling for a boycott of the film.