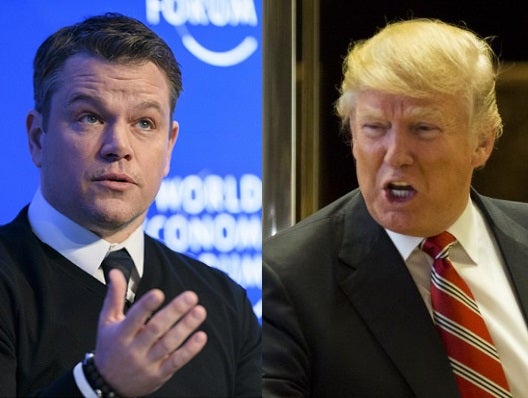 US actor Matt Damon (left) speaks as he takes part in a panel session during the first day of the World Economic Forum, on January 17, 2017 in Davos. Damon said Wednesday, Jan. 18,2016, that he wanted to see US President-elect Donald Trump (right) to succeed because it would be good for everyone. AFP

Davos, Switzerland — Movie star Matt Damon said Wednesday he was grudgingly rooting for Donald Trump to make a success of his presidency, despite Hollywood’s bitter opposition to the Republican billionaire.

“I would like to see him be successful, I really would,” Damon told CNBC at the World Economic Forum in Davos, the Swiss ski resort where movers and shakers from the political and business worlds are holed up this week.

“Obviously it’s no secret that I didn’t vote for him,” said the 46-year-old star of the “Jason Bourne” spy series.

But he added: “I wish him well, and we all must. A successful American president is good for all of us.”

Damon defended fellow A-lister Meryl Streep over her verbal brawl with the US president-elect, who labeled her “one of the most overrated actresses in Hollywood” after she used an awards speech to trash him.

“He’s right, she’s totally overrated as an actress,” Damon joked, before adding: “I thought what she said about bullying was very important… Bullying people with less power is unhealthy, and it’s behavior that children will model.”

Damon said he was still nervous about what the next four years will bring now that Trump is about to become “the most consequential person on the planet”.

He cited the “beautiful handwritten note” that George H.W. Bush wrote in 1993 to Bill Clinton as the then Republican president handed over to his Democratic successor, which read, “I am rooting for you”.

“It was just the most graceful and wonderful and heartfelt sentiment, and I think that’s what, in this moment, we all have to be feeling,” Damon said.

The actor is in Davos to promote his charity Water.org, which works to improve global access to clean water and sanitation.

“This problem is completely solvable — we solved it for ourselves in the West a hundred years ago and for 663 million people, it really is kind of what animates their entire lives,” Damon told AFP in an interview.

“If we do make this comprehensive effort, we really actually can end this crisis in our lifetime — and wouldn’t that be grand?”

Forest Whitaker, another actor working the crowds in Davos this week to promote his charitable causes, also tried to strike a positive note two days ahead of Trump’s inauguration.

“I can’t be optimistic based on some of the statements that have been made, but we have to come to the table and find common ground,” said the Oscar-winning star of “The Last King of Scotland”.

“There are those who doubt we’re going to move forward in a positive way, but we have to try. If it doesn’t happen, then people have to stand up and make their voices heard.”

Whitaker and Damon were among several stars adding a little sparkle to Davos this week, with Whitaker receiving an award for humanitarian work alongside the singer Shakira as the jamboree kicked off Tuesday.

George Clooney has also been spotted in the swish resort, though it is his wife — human rights barrister Amal Clooney — rather than the actor who is participating in the forum. CBB