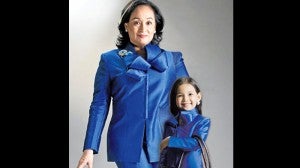 After the impressive pilot telecast of the new series “100 Days (to Heaven),” we continued viewing the show on its opening week and found it instructive that we got a surprising number of second and even third impressions. It prompted us to adjust our overall perception of the program.

The biggest shift happened when the adult character of the story’s protagonist, Anna Manalastas (Coney Reyes), was replaced by her mini-me version, played by Xyriel Manabat, after St. Peter agreed to send Anna back to earth, to give her a second chance to make up for her many cruel acts.

After Xyriel “took over,” we were surprised to see that Coney’s participation in the show was drastically abridged. Once in a while, she would reappear to briefly “think” the thoughts of her adult version of the character she shared with Xyriel. But, much more often, it was the cute, little child actress who held center frame.

In a sense, this was understandable, since St. Peter had stipulated that it was Anna as a child who would be the active element in the “nasty” character’s reform and rehabilitation.

On point of stellar coverage, however, Coney ended up with the short end of the stick (so far) in terms of active projection, so the imbalance clearly has to be addressed and remedied.

Fact is, there are dramatic devices and conceits that can be employed to mitigate the situation, and give Coney her due. We trust that the show can utilize those alternate options soon, so the production isn’t deprived of the mature actress’ proven acumen and energy.

Another unfolding element of the show that needs to be remedied is the general weakness of its kontrabida quotient. Thus far, all we have is a cupidacious relative who wants to take over Anna’s thriving business empire.

Finally, the show’s storytelling has yet to dynamically detail how she can turn her former victims’ lives around. A general “reformed” feeling of better intentions simply won’t cut it in terms of convincing and thematically affecting storytelling, so more work is needed here, as well.

P.S.: A good development is the introduction of the street-smart seam artist played by Jodi Santamaria. The actress’ take in this new addition to her gallery of teleserye characters is bracingly edgy and textured, indicating that, unlike many of her contemporaries, she has the imagination and work ethic to act, rather than merely pass muster with lazy, little variations on herself.

It would be really great if more young-adult performers would be similarly ambitious and gung-ho creative.