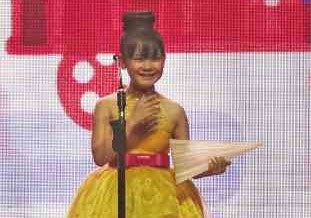 Child actress Rhed Bustamante speaks with the self-confidence of a seasoned professional who’s been in the business for decades.

Asked if she was inspired by other spooky characters like Sadako (of “The Ring”) or Damien (of “Omen”) in creating Anghela, the demonic child mystic of Erik Matti’s “Seklusyon,” Rhed explained, without skipping a beat: “I didn’t copy other people. It’s like an exam in school. No copying allowed. You have to be original. You have to come up with your own style.”

And she described her acting technique as “freestyle.”

“I do what I feel and if Direk Erik approves, then I would do it again and add something extra,” she recalled. “I make it a point to use my eyes, not my eyebrows. Acting with your eyebrows is something a

Is it any small wonder then that Rhed easily charmed the jurors (which included actor John Lloyd Cruz and foreign programmers Philip Cheah and Paolo Bertolin) and won the Jury Prize for Breakthrough Performance at the recently concluded Metro Manila Film Festival?

Her director openly told the media that she could give such front-runners as Nora Aunor and Eugene Domingo a run for their emoting.

“Gusto ko pong magpa-fiesta,” the Grade 4 student said of Direk Erik’s kind words. “I was so happy to hear that my director had so much faith in me … that he thought I could compete with big stars.”

Direk Erik wasn’t a stern taskmaster on the set, she insisted. “‘’Pag joke time, he cracked jokes with us.
When it was time to work, he was serious.”

She dedicated the honor to her director, the entire “Seklusyon” cast and crew, the Star Magic team, and of course to her family. (Dad is a mechanic; mom is a housewife.)

The trophy is now displayed at home, beside Pipoy, her nickname for a Santo Niño imahen.

She said that she owes everything to God.

“This is my second life,” she related. “I’m a cancer survivor. I got sick as a newborn baby.”

Asked what she fears the most, she quickly responded: “God. He can take away your life anytime.”

But, in essence, Rhed is still a kid who frequently dishes out wisecracks when you least expect it.

She quipped that she studies in “Barcelona … Spain.”

“Joke lang po. I study at Barcelona Academy in Marilao, Bulacan,” she exclaimed.

Her mood turned glum because she said she wasn’t allowed to watch “Seklusyon,” which is rated R-13. “I’ve only seen the trailer.”

Her character Anghela spews out a mysterious black liquid, which can be likened to squid ink laced with petrol, whenever she cures the sick and sinful.

Rhed admitted that she loved the taste of the dark goo. “It’s delicious, sweet and made of grapes.”

And why was she named Rhed?

“Red is the color of love,” she gushed.