God save the queens 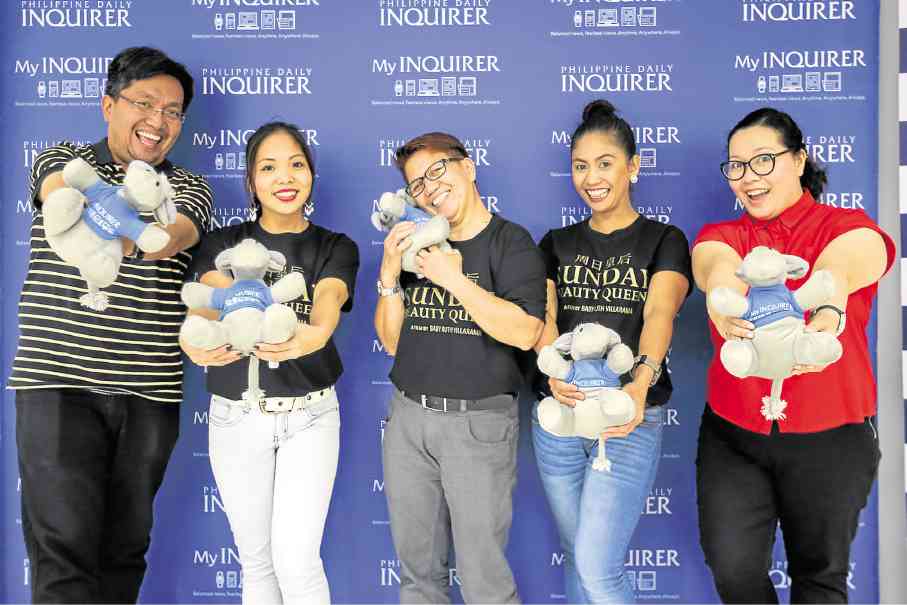 Now, we know why the women of Baby Ruth Villarama’s landmark documentary, “Sunday Beauty Queen,” deserve to be “stars” not just on weekends, but every day of the week.

Without skipping a beat, the three discussed their past, present and future with the same candor and humor evident in the documentary—an entry in this year’s Metro Manila Film Festival. (The docu won best picture, Gatpuno Antonio J. Villegas Cultural Award and best editing at the MMFF.)
They excitedly talked about meeting stars like Nora Aunor and Ricky Davao at the parade and giddily wished for a selfie with MMFF juror John Lloyd Cruz.

The film has had an uncanny effect on viewers who wholeheartedly embraced its characters.

On the day of the Inquirer visit, a fan (a former OFW himself) met up with them to hand over a check—his donation to the Berthune House (for troubled migrant workers).

Designer Bessie Besana, who also worked in Hong Kong like the Queens, volunteered to make gowns for the ladies’ awards night appearance.

On its second week, the film is still being showered with spontaneous support from netizens—who are steadily campaigning to keep the docu in cinemas.

There was always the looming danger of being pulled out (at the start, it was not even shown in some provinces). But the Queens remained gracious even under tremendous pressure—exemplifying the quiet resolve and resilience of Filipinos everywhere. 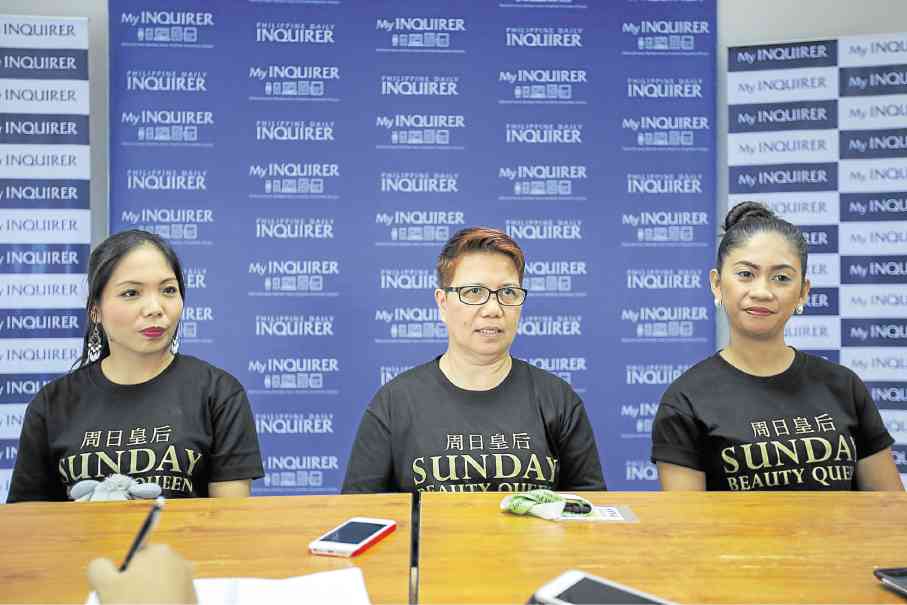 It’s been an uphill climb so far, but as these OFWs know only too well: The taste of tears makes each triumph sweeter.

What’s it like meeting the viewers in the theaters?
Leo Selomenio (LS): We feel like stars! They mob us. They ask for photos with us. They ask about Mommy.

How’s Mommy?
LS: OK lang. Every time people see me in theater lobbies, they ask: “Where’s Mommy?” She is in Hong Kong. She hasn’t seen the docu yet. We hope to have a screening in Hong Kong soon.

Was it hard revealing so much of yourselves in the film?
LS: Not really. It was just like an ordinary working day for us. The only difference was that a crew was following us around. I felt like “Dora the Explorer,” walking all over Hong Kong with my backpack. That’s my life. I never rest.

What led you to pageant organizing?
LS: I used to hang out in karaoke bars. It was a bad scene—people got drunk or got involved in fights. After a while, I got fed up. I felt like we were liabilities in Hong Kong. I told my lesbian friends: Let’s get out of this zone.

So we formed an organization: Kabisig. We organized a contest for lesbians: Chick Boy. Then, other groups joined us. Eventually, it became a pageant for female domestic helpers.

How were you able to charm your boss, TV-film producer Jack Soo, who seemed so strict?
Mylyn Jacobo (MJ): His former helpers were Chinese. I was his first Filipino helper. He said he always wanted an assistant from the Philippines. He chose me from among 40 applicants. He was a perfectionist…very moody and scary!

I later learned he didn’t like helpers who kept frowning. Good thing, I was always cheerful! He seldom smiled, but he said he was happy inside. He never scolded me. He later told me that he felt blessed to have me. Sometimes, he’d request for Singaporean dishes. So I would Google recipes. His children called me: “Dad’s Angel.” He treated me like a real daughter.

One of the highlights was Hazel, watching her son’s graduation on the phone.

Baby Ruth Villarama (BV): We cried while shooting it.

Hazel Perdido (HP): My son asked me why I wasn’t able to go home for his graduation. I explained to him that I had to take care of my employer’s dog. He was upset.

But your son got to watch the docu with you recently?
HP: Now, my eldest understands me more. Now, he always asks me where I am going. We became closer. He would always check on me. Then, he would tell me: Why are you still out? It’s already late! I have three boys: 12, 11 and 9.

Some OFWs are not able to save for the future?
LS: Maybe they don’t know how to manage their time and earnings. Apart from my main job, I also do part-time work for the consulate and other people. I feel like St. Peter; my bag is filled with keys to the places where I work part-time.

Will the film help change people’s perception about domestic helpers?
MJ: Since I got back home, I was able to see the differences then and now. Before, I only wanted to earn. I was able to save, but I had to send four siblings to school. I helped my brother take up his masters’ degree in marine engineering, but he soon got married. I got hurt because I thought they didn’t value my hard work. I hope this movie will teach people to appreciate OFWs more.

On Facebook, we post photos of pageants… we’re always laughing and happy. We wouldn’t want to show our hardship. We don’t want our batchmates to think we are suffering, pushing a kariton. But now, I am no longer ashamed about being an OFW.

Why didn’t you feature serious abuses like rape and other violent crimes committed against OFWs?
BV: That is not the direction we wanted to take. We wanted to promote empathy. Those cases are already being tackled on TV. I wanted people to understand and appreciate them as OFWs.

What was your reaction when you were told about being part of the docu?

HP: I shared it with my friends. They told me that I’d get to walk down the red carpet. I asked my new employer if I could spend Christmas in the Philippines. It was perfect timing for the MMFF, too.

LS: Okay lang sa akin. My relatives got to see it in Iloilo. The film wasn’t supposed to be shown there. I cried in front of the mayor’s secretary to help us get theaters in my hometown.

I was then set to receive an award from the mayor. I told them that I won’t accept the trophy if they didn’t help us. I don’t care about the award; my provincemates should get to watch this film.

How were you able to convince your employer to participate in the docu?

LS: Before her interview with Direk Baby Ruth, my boss went to the salon to have her hair and makeup done!