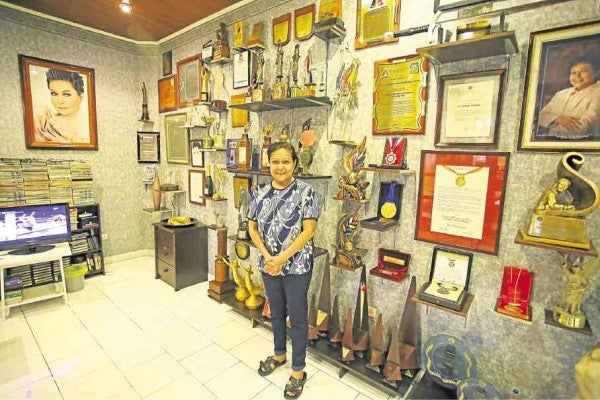 It’s the stuff of show biz legend and lore.

Superstar Nora Aunor has lost count of the number of times she transferred residences.

The Inquirer home visit, which coincided with Christmas Eve preparations, turned into a sentimental journey for Ate Guy, as the Superstar is fondly called by her fans.

In one corner of the house hangs a framed photo of the Superstar waving from the second-floor window of a nondescript apartment. 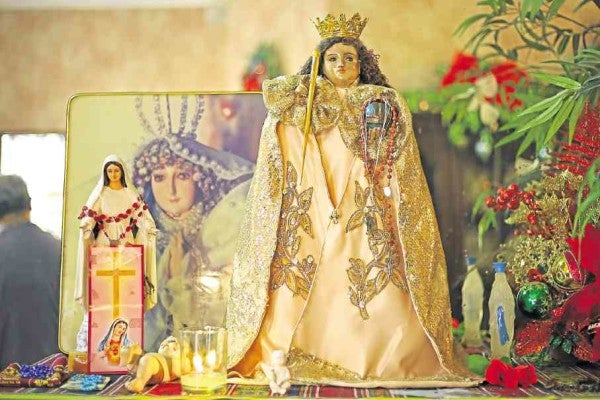 She recounted that her family had moved to Natib because it was near the places where director Artemio Marquez shot their string of potboiler hits in the 1970s.

From that humble flat in Natib, she later moved to mansions in La Vista, Greenhills, Valencia, Balete and Corinthian Gardens, to name a few.

She recounted that her first big property in La Vista was 3,000 square meters. Another home in Jackson, Greenhills, was just as sprawling. 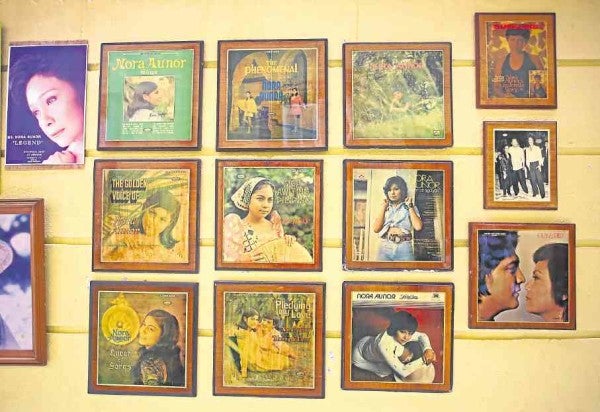 Framed album covers and photographs from the 1970s

Her Valencia home was a lucky charm, she recalled, because some people believed it harbored a white dwarf.

“But I had to sell it, to produce movies,” she remarked.

On at least two occasions, she had to sell her home, in order to produce such classics as Gerardo de Leon’s “Banawe” and Mario O’Hara’s “Tatlong Taong Walang Diyos.”

Even though it is modest in her estimation, her latest Quezon City address, however, is special because it also serves as home, a veritable museum, for her ever-growing collection of trophies and other memorabilia. 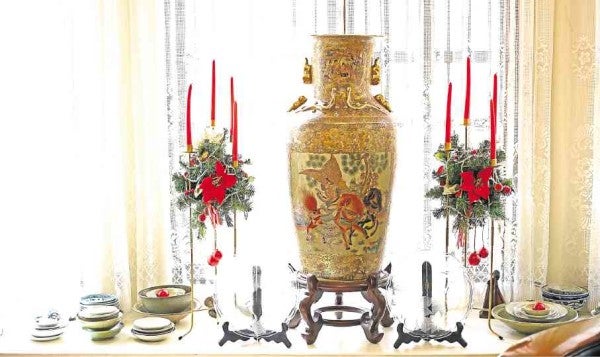 This time, she allotted an entire room to her numerous industry awards—local and foreign, for television, theater, music and the movies, from critics and academicians.

“Before, my trophies were scattered in my small condo unit,” the singer-actress told the Inquirer in Filipino. “Now, I made sure that they are all in one place.”

(According to IMDb, she has won at least 66 acting awards.)

It is by no means complete.

“There are still a few missing ones,” she owned up. “I lost some of the Patas trophies (for her TV shows “Superstar” and “Ang Makulay na Daigdig ni Nora”) because I kept transferring homes.”

Two of the eight best actress trophies from the Metro Manila Film Festival are nowhere in sight. (Good thing, she was able to save her best performer award for “Atsay” in 1978, because it was the first and only time such a recognition was given by the MMFF.)

The “Tawag ng Tanghalan” trophy, which started it all.

She also cannot find her citation from The Outstanding Women in Nation’s Service (Towns), along with a similar honor from the Quezon City government.

“I am asking help from the award-giving bodies. I want to have replicas of the missing trophies made,” she said.

Fortunately, she was able to retrieve from Music Museum her trophy as grand champion in the singing tilt, “Tawag ng Tanghalan,” which she topped in 1968 with the song, “Moonlight Becomes You.”

“That was the trophy that started it all,” she quipped.

Who would’ve known that this wisp of a girl from Iriga would win not only the hearts of the judges of “Tawag ng Tanghalan,” but also charm critics and cineastes from all over the world?

Occupying special places of honor are her various international awards: Best actress from the A-list Cairo film fest for “The Flor Contemplacion Story” (1995), and her triple whammy for “Thy Womb”: Bisato d’Oro in Venice, Asian Film Awards in Hong Kong and Asia Pacific Screen Awards in Brisbane (2012).

Also stored in the trophy room is an extensive music collection—tapes of songs she recorded for the musical-variety show, “Superstar.” “It was on air for 22 years,” she reported.

Other souvenirs from her storied life are displayed in the house—including two portraits by painter Peck Piñon, who was also known as comedian Tugak. One of the paintings depicts Guy’s winning moment as a Princess of Philippine Movies, while the other shows a young Guy wearing a traditional terno.

Hanging on the walls are paintings by Guy’s friend, John Rendez—most of the art works portray superheroes and other pop culture icons, but one features angels and is displayed next to an ivory Santo Niño.

The child Jesus figure is one of two that she was able to keep through the years. “I’ve lost many antique imahens. A warrior Santo Niño was borrowed by a friend for a procession, but it was never returned to me.” 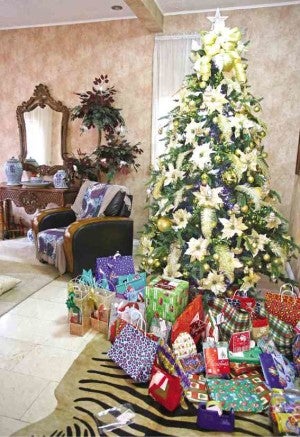 For the holidays, she put up a Christmas tree, spruced up by her assistant Lgee Navarro, while the gifts underneath were wrapped with the help of John’s daughter, Anacain Porter.

She remembered past Christmases that she spent all by her lonesome—with only John and his family as her companions for noche buena.

It was in stark contrast to previous holiday seasons, when her parents were still around.

“When I was still new in show business, we always had a Christmas party at home,” she reminisced. “My mother took care of the food and the gifts for the guests. Everyone was welcome: friends, fans, reporters, costars and relatives from Bicol. We also had a singing contest for the staff of NV Productions.”

Since her home in La Vista had a swimming pool, the revelry always ended with guests wading in the water. “Nagtutulakan kami! Masaya talaga!”

How she misses those halcyon days of her youth. “Happy memories. I hope to throw another big party before I retire from show biz.”

But retirement is in the far-off future, as far as the Noranians are concerned.

This year, her fans are organizing a mammoth convention, to mark the Superstar’s 50th anniversary in the entertainment industry.

“Fans from here and abroad are attending,” she said. “Even fans who aren’t members of any organization are expected.” 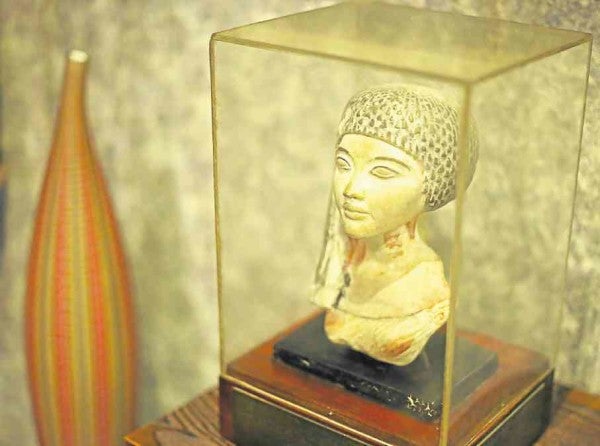 She acknowledged that she is clueless about the convention’s details. “The fans are the ones preparing everything. I will just attend the event. Hindi ako iniwan ng mga fans ko … kaya mahal na mahal ko sila.”

Another big dream is to build a vacation home in the province.

“I want a resthouse in Bicol, but first I plan to buy a farm in Nueva Ecija,” she volunteered. She is eyeing a 6,000-sqm property, where she can raise turkey, chicken, pigs and several head of cattle.

“It can be a good business someday,” she pointed out. “I want to start small. Kahit simple lang … at least may sariling negosyo.”

Read Next
Tail Tales: Vilma Santos’s pride and joy
EDITORS' PICK
House energy committee chair Arroyo bats for cheap electricity
Karding damage to infrastructure at P23M
Bongbong Marcos says PH ‘open for business’ with new Clark Airport terminal
Individuals affected by ‘Karding’ now over 157,000
Reignite your passion with the vivo Y35
Newbie gamers are in for a treat with the power-packed feature of vivo Y16
MOST READ
Angelica Panganiban ‘duguan, sugatang mom’ one week into breastfeeding
LPA enters PAR, may develop into tropical depression
Badoy not with Office of the President, NTF-Elcac, under Marcos admin — solon
Charges readied vs gov’t guard with P290-M deposits
Don't miss out on the latest news and information.