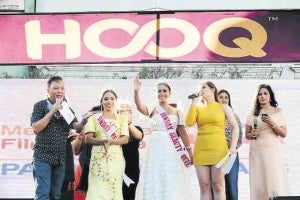 MANILA — “No more mainstream, no more indies. We are one,” said Baby Ruth Villarama whose “SundayBeauty Queen” bagged the best picture trophy and the Gatpuno Antonio J. Villegas Memorial Award at the 2016 Gabi ng Parangal held on Thursday night.

“Sunday Beauty Queen,” the only documentary to be included in the MMFF’s 40-year history, also brought home the best editing trophy. It follows a group of Hong Kong-based house maids as they prepare for a beauty contest dubbed as the “Miss Philippines Tourism Hong Kong.” The pageant is held in the middle of Hong Kong’s Central Station. It serves as a diversion for the ladies who want to forget their identities as migrant workers, even for just a short while.

The best actress honor was bestowed upon Irma Adlawan for her performance in the Alvin Yapan film “Oro.” Her co-stars in the political drama film also copped the best ensemble honor.

The Fernando Poe Jr. Memorial Award for Excellence was bestowed upon “Oro.” Producer Mark Shandii Bacolod dedicated the film to those ravaged by typhoon “Nina” in Bicol, where the movie was shot. 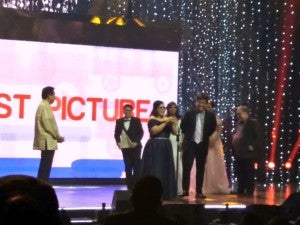 The filmmakers and artists in the documentary Sunday Beauty Queen celebrate their Best Picture win at the Metro Manila Film Festival. (PHOTO BY MARINEL CRUZ/ INQUIRER)

Erik Matti also copped the best director award for “Seklusyon.” Set in 1947, it tells the story of a group of seminarians sent to a remote convent to live in seclusion on the last day of their training with the aim of shielding them from evil of the world. Conflict arises when a mysterious young girl enters the convent.

The horror-thriller won the best screenplay honor for Anton Santamaria. It also bagged most of the technical awards. It received the best cinematography, best production design, best original theme song award for “Dominus Miserere” by Francis de Veyra, and the best sound design.

The winners of the Children’s Choice for Full-length Films awards are “Saving Sally,” “Sunday Beauty Queen” and “Vince & Kath & James.” 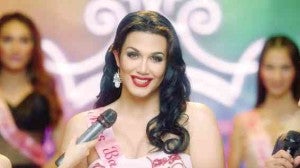 Metro Manila Development Authority chairperson Thomas Orbos, in his speech, pleaded for a weeklong extension of screenings in cinemas, especially of movies performing poorly in the box-office.

In a statement, the MMFF executive committee echoed Orbos’ plea: “We make this appeal to our partners, the theater owners, to celebrate this resounding success with us by allowing the extension of the duration of the festival by four days, so that it completes a 14-day run that will end on Jan. 7, 2017.” While on stage, Orbos announced that some theater owners have heeded their request.