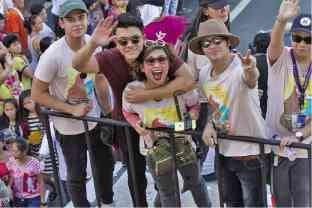 In the days leading to the Parade of Stars, the show biz tradition that formally kicks off the Metro Manila Film Festival (MMFF), some critics had predicted that the event wouldn’t be as successful as its previous editions, because it wasn’t as “star-studded.”

But that was, perhaps, an underestimation of how big the celebrity culture is in this country. Sure, last year’s parade had the “AlDub” love team—at the height of its fame—in addition to perennial crowd-drawers like Vic Sotto and Vice Ganda.

But as Eugene Domingo, the lead star of “Ang Babae sa Septic Tank 2: #ForeverIsNotEnough,” pointed out a few minutes before she mounted the float, Filipinos will always be big fans of movies and celebrities.

“Despite the intrigues, I think the parade will always be interesting because we are naturally attracted to happy events, like this one,” she said.

Unmindful of the afternoon heat, fans moved in groups, hopping from one float to another, seeking photo-ops with the stars. Others, meanwhile, were perched atop nearby tree boxes, content on simply watching the hustle and bustle in the area.

“Kabisera” lead star Nora Aunor, who still gets excited about joining the parade, even handed out P20 bills—her pamasko—to the kids. Before long, it wasn’t just the little ones milling around the Superstar.

“Yes, the parade may have been less star-studded. But I’m proud to say that we had a lot of noteworthy artists who have won trophies internationally,” said Liza Diño-Seguerra, chair of the Film Development Council of Philippines, which helped the MMFF organizers in mounting the event.

There were more parade first-timers this time around: Paolo Ballesteros, who stole the scene with his bedazzled, body-hugging suit, woke up at 5 a.m. to give him ample time to get ready. “This is my first, so I’m excited to see everyone,” he said.

Julia Barretto (“Vince and Kath and James”) said she was thrilled to take part in the annual parade. “Being part of the event is something me and my friends only joke about. Now I’m here!” she said.

“I’m happy and nervous,” added Julia’s costar Ronnie Alonte, whose rabid female fans threw face towels at the actor, who then used them to wipe his sweat, before tossing them back to the girls.