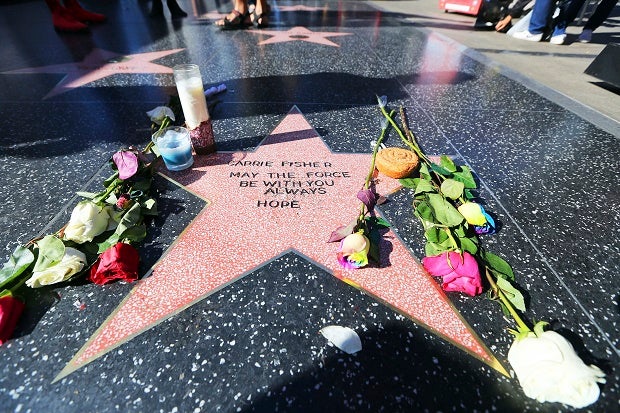 Flowers and candles adorn an impromptu memorial created on a blank Hollywood Walk of Fame star by fans of late actress and author Carrie Fisher, who does not have an official star on the world-famous promenade, in Los Angeles Wednesday, Dec. 28, 2016. Paste-on letters spell out her name and the phrase “May the force be with you always. Hope.” AP

LOS ANGELES — Carrie Fisher didn’t have a star on the Hollywood Walk of Fame, so fans have taken over a blank sidewalk star to pay tribute to the late “Star Wars” actress.

Fan Jason Thomas tells news station KNBC-TV Los Angeles (http://bit.ly/2hx1tj2 ) that he took it upon himself to make a star for Fisher, who died Tuesday at age 60.

Paste-on letters spell out her name and the phrase “May the force be with you always.” Candles and flowers surround the star.