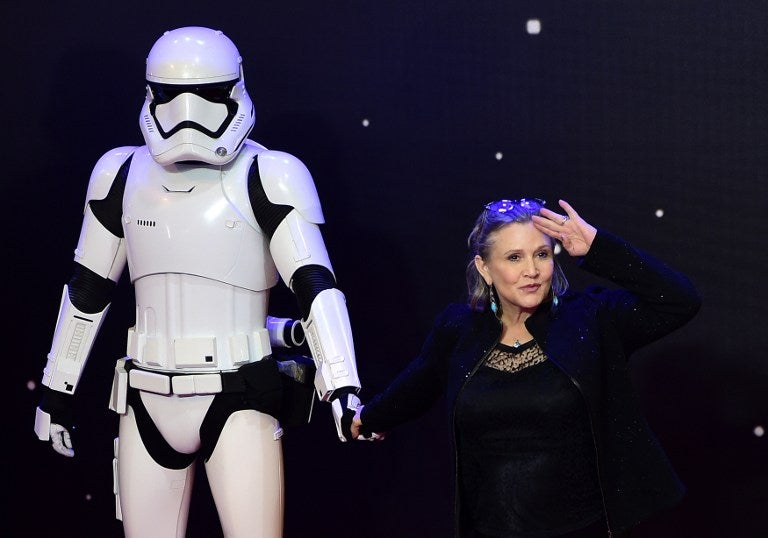 This file photo taken on December 16, 2015, shows US actress Carrie Fisher (right) posing with a storm trooper as she attends the opening of the European Premiere of “Star Wars: The Force Awakens” in central London. A family spokesman said on December 27, 2016, that Fisher, the iconic actress who portrayed Princess Leia in the Star Wars series, died Tuesday following a massive heart attack last week. She was 60. AFP

It was a second straight weekend of domination in North America for the first of three one-off “anthology” stories in Lucasfilm’s “Star Wars” universe, according to industry data released Tuesday.

But celebrations were canceled out by news that 60-year-old Fisher, who played the rebel heroine Princess Leia, had died in Los Angeles following a heart attack on a transatlantic flight four days earlier. 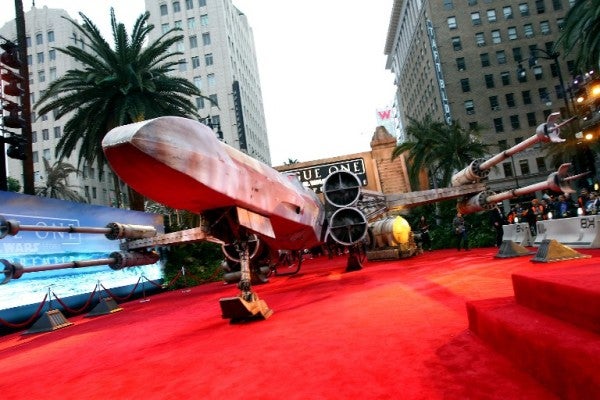 A general view of the atmosphere during The World Premiere of Lucasfilm’s “Rogue One: A Star Wars Story, In Hollywood, California, on December 10, 2016. AFP

“Such devastating news. I never met Carrie, but consistently heard how profoundly sharp and witty she was. Her maverick spirit will be missed by us all,” “Rogue One” star Felicity Jones said in a statement to the entertainment website Deadline.

“She was Princess Leia to the world but a very special friend to all of us. She had an indomitable spirit, incredible wit, and a loving heart,” said Lucasfilm president and “Rogue One” producer Kathleen Kennedy.

A slew of new movies opened in the United States and Canada over the Christmas holiday weekend.

“Sing,” an animated musical comedy featuring the voices of several A-listers including Matthew McConaughey and Reese Witherspoon, burst into second place with $56.1 million.

The third spot went to “Passengers,” a sci-fi fantasy starring Jennifer Lawrence and Chris Pratt, who play two space travelers jolted from hibernation on a deep-space mission. It pulled in $23.1 million.

Claiming fourth spot was “Why Him?” a comedy about a dad feuding with his daughter’s boyfriend, which opened with $15.5 million.

“Assassin’s Creed,” based on the hugely successful video game franchise of the same name, took fifth with $14.8 million.

That means “Moana,” a computer-animated musical fantasy about a brave Polynesian teenager, slipped to sixth place from number two, pulling in another $12.6 million.

The film had previously topped the box office for three weekends and has now grossed $185.6 million to date.

At number seven was Denzel Washington’s “Fences,” with $11.6 million, while Oscar frontrunner “La La Land” pulled in $9.2 million for eighth place on the third weekend of a limited release that is about to expand nationwide.

The seasonal comedy “Office Christmas Party” dropped six places to number nine, with a haul of $7 million, for a total of $44.1 million during its three-weekend run.

Rounding out the top ten was “Collateral Beauty,” a sentimental drama featuring Will Smith. It managed to pull in $6.4 million. CBB

Read Next
Alvin Yapan wishes for change
EDITORS' PICK
PH importing sugar after all: Marcos okays 150,000 MT
Supply of white onions gone since July, growers say
Bakers’ turn: P4 hike on bread prices sought
What to watch out for when selecting a video surveillance solution
vivo brings to the Philippines a powerful smartphone with a slimmer body, the vivo Y02s for only PHP 6,499
House energy committee chair Arroyo bats for cheap electricity
MOST READ
LOOK: Miel Pangilinan dazzles in glittery pre-debut shoot
DepEd to give teachers P5K cash allowance within first week of classes
Suspect in rape-slay of teenaged biker arrested in Camarines Sur
Mayor bares issues vs closed QC school
Don't miss out on the latest news and information.