MANILA, Philippines—In a bid to improve the country’s tourism industry, the SM Group of Companies is venturing into the entertainment industry through its latest project, the SM Mall of Asia Arena.

Its overall goal: To become one of Asia’s premier entertainment destinations that will cater to both entertainment and sports events for local and international talents. 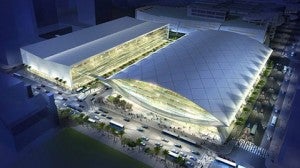 During its recent trade launch at the SMX Mall of Asia located right in front of the Arena’s construction site, Hans Sy, the president of SM Prime Holdings Inc., said the project is part of Henry Sy Sr.’s vision to help the country’s tourism and entertainment industries by staging events for first-rate Filipino talents.

Sy Sr. is SM Groups’ founder and SM Prime Holdings’ chairman. He set up the first SM store in Quiapo in 1946 and expanded the business nationwide which now has 41 branches throughout the country.

The MOA Arena also has, and is the first venue in the Philippines to offer corporate suits for VIP’s or groups who can get the best view in the Arena from a higher position while having an exclusive party or business meetings.

In an interview with Nicole Deato, senior business development manager of West Avenue Theaters Corp., she said that after they researched in Southeast Asia, they found out that, aside from Singapore who’s already putting up their version of a corporate suite, the Arena is the only that has it.

“But we’re going to open first before Singapore,” she added.

Deato said that in terms of transportation for students from different universities who attend game events as such, “A lot of students will be happy for the nearer venue because the Arena is closer to the university belt.”

“It’s very accessible to all types of transportation from south, north and Edsa. You can take a train. . . It’s just like going to the Mall of Asia,” Deato said.

For those who will bring their own car, the Arena offers 1,400 parking slots.

On its website at www.mallofasiaarena.com, it shows that the Arena will indeed have its first hosting of the NCCA and UAAP opening on June 30,7 p.m. and July 7,8 p.m.,

Meanwhile, in his speech during the trade launch, Edgar Terejero, the senior vice president of West Avenue Theaters Corp., said that the Arena is committed to provide sporting events of promotional and marketing support in various locations nationwide for every show.

The arena guide book also said that with “MOA Arena’s strategic location in one of the country’s preferred shopping and business destination, advertisers’ brand reach will reach conventional avenues.”

“We are your partner when it comes to event,” Terejero said.