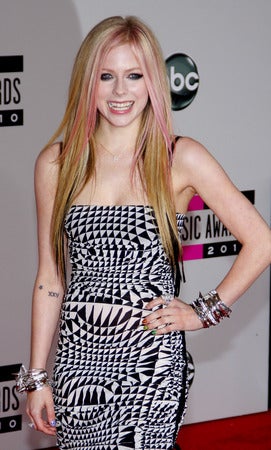 Avril Lavigne has had “enough” of the insults and repulsive jokes thrown at Nickelback.

In a timely response to Mark Zuckerberg’s “tirade” against the ’90s Canadian rock band, led by her ex-husband Chad Kroeger, the “Complicated” songstress channeled her anger in a Twitter post on Friday.

“Either way, you’re allowed your musical opinion, however, your jab at Nickelback is in poor taste,” Lavigne wrote.

“When you have a voice like yours, you may want to consider being more responsible with promoting bullying, especially given what’s going on in the world today,” she concluded, highlighting the fact that Nickelback sold 50 million albums worldwide.

The Facebook co-founder launched Jarvis, his personal AI assistant voiced by Morgan Freeman, and during his Facebook video on Wednesday, while demonstrating how his “personal butler” works, he cracked a decade-old joke about the band famed for their hits “Photograph,” “Rockstar” and “Far Away.”

He made a request for Jarvis to play Nickelback songs, to which Jarvis declined. “And Jarvis could play all of our favorite music…hey, play us some good Nickelback songs,” the tech mogul requested.

“I’m sorry, I’m afraid I can’t do that,” Jarvis responded. “There are no good Nickelback songs”

Zuckerberg froze before saying, “Good, that was actually a test.”

Lavigne and Kroeger tied the knot in 2013 before they split in September 2015.

Nickelback has always been the “butt” of jokes for “being one of the worse bands.” For years, Kroeger, drummer Daniel Adair, keyboardist Ryan Peake and bassist Mike Kroeger faced criticism over their usage of alcohol and prostitution as their songs’ themes.  Gianna Francesca Catolico