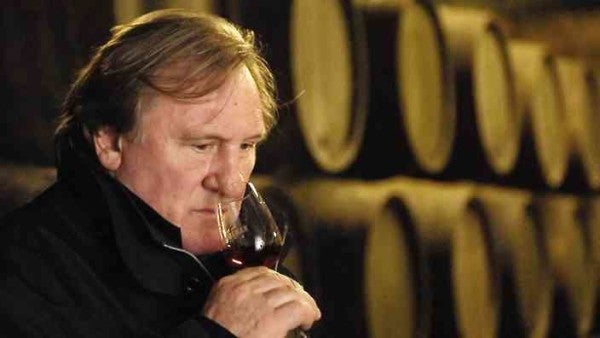 What do French film stars do after they wrap up their illustrious, decades-long acting career? We don’t know about Simone Signoret, Alain Delon and Philippe Noiret—but in Gerard Depardieu’s case, he’s resurfaced on TV as the host and tour guide of the cooking and eating show, “Bon Appetit: Gerard Depardieu’s Europe.”

We caught the show recently on Lifestyle, and found Monsieur Depardieu a great traveling companion on the French food fest and travelogue—

which even viewers who can’t parlez vous can watch, because subtitles are helpfully and elegantly provided.

The particular telecast we watched had Depardieu waxing nostalgic about the yummy, “naturally organic” veggies he loved chomping on as a child—many of which are no longer “popular” or even available today.

“Naturally organic” may sound redundant and even oxymoronic, with snitty emphasis on the moron part, but it’s stated for a reason. “Organic” is the rage now, but when the French icon was a kid, everything was natural and produced without chemicals, so the word wasn’t even used or applicable then!

That bit of Gallic insight gave us something regretfully sad to nibble on, as the show tried to make belated amends by looking for and  finding some of the still “extant” (but happily not extinct) vegetables the star had doted on in his early childhood.

Expectedly, Depardieu was in seventh and perhaps even ninth heaven when he was reintroduced by the show to their natural graces and bounties in his senior years!

For our part, we were bowled over when the same telecast had the star’s “gastronomically ambulant” team visiting what looked like a castle in the Versailles area, and entering, quite by chance or serendipity, a small boite that featured a most unusual old menu:

It narrated the centuries-old tale of the nearby castle’s siege by the enemies of the kingdom. The siege lasted for many months, until the royals’ food supply got depleted and they were faced with only two options—surrender, or starve to death!

Most fortuitously and amazingly, however, the royals’ chefs offered a third choice: It “just so happened” that the castle had its own zoo of exotic animals, like elephants and zebras and lions and peacocks and such.

So, instead of surrendering, the chefs fed the “starving” royals with the most unusual culinary creations ever thought up—

elephant steak, loin of lion, roasted peacock instead of turkey for a thanksgiving feast—etc.!

Depardieu had a fun and shocked time reading the items on the old royal menu aloud,  and he and his culinary tour comperes reveled in recalling the most unusual and exotic dishes they have ever tasted!

Gerard Depardieu may be a thespic nonplayer these days, but he’s clearly found another passion to excite himself about in his new “eating, traveling and historically-hysterically surprising” show!

If this will be “Bon Appetit’s” dependable fare for its viewers, please reserve a table for 10 for us, for the fun and tasty idiosyncratic weekly viewing treat!