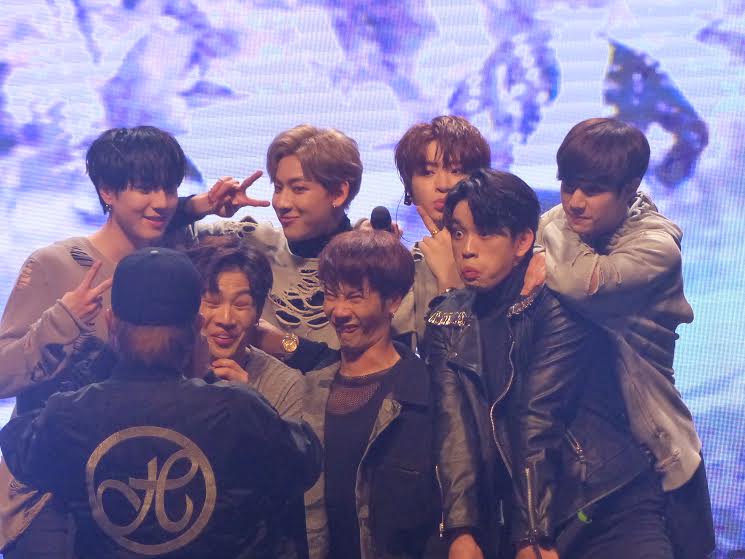 After losing in the balloon game, JB, Jackson, and Jinyoung of the K-pop group, GOT7, make ugly faces for the cameras during their fanmeet at the Waterfront Cebu City Hotel and Casino on Dec. 21, 2016. (PHOTO BY BEMBEM GOMEZ/ INQUIRER VISAYAS)

CEBU CITY — Turbulence: (noun) a state of confusion and lack of order.

There could be no better word to best describe the feelings of the fans of the seven-member K-Pop boy group GOT7 who was here on Dec. 21 for a fanmeet.

Aptly named GOT7 Flightlog: Turbulence in Cebu 2016, the venue of the event was drowned in the fans’ screams of excitement and tears of joy.

For the about 1,000 fans, seeing JB, Mark, Jackson, Jinyoung, Youngjae, Bambam, and Yugyeom on stage in Waterfront Cebu City Hotel and Casino was a dream come true.

Unlike a concert where the artists’ performance is usually limited to a song and dance routine, a fanmeet gives more because it provides the fans a chance to interact and play games with their idols, aside from a few song numbers.

Some fanmeets have perks like being able to do high-five with their idols.

And in this fanmeet, the fans got all that.

GOT7 brought a whole new level of skill to the stage by impressing all present with their impressive choreography and vocal skills.

As is common in K-Pop, fans are given a name which the group calls them by. Got7 fans are affectionately referred to as iGOT7 (아이 갓세븐), commonly stylized as Ahgase (아가새) as a wordplay on its Korean spelling, as it can also be understood as baby bird.

Organized by the Singapore-based Three Angles Production (TAP), the event allowed Ahgases to meet their idols at the Pacific Grand Ballroom of Waterfront Hotel last Wednesday.

This was also GOT7’s first visit to Cebu. Ticket prices ranged from P9,000 for VVIP to P2,000 for Free Standing Zone.

Fans were able to submit questions and requests for GOT7 to answer on stage.

Some requests ranged from cute, like Bambam was asked to do aegyo or cute poses, then sexy, and mature poses. Fun requests were also submitted, like Yugyeom was asked to dance to Chris Brown’s new song, which he gamely obliged despite having no music, which Jackson remedied by beatboxing.

Games were also played at the fanmeet.

The first was the Balloon Game, where a balloon was quickly inflated over the members’ heads as they reacted to a ‘slap’ or two from the host, TAP’s Chris.

The unlucky ones were first-time loser JB, Jinyoung, and the ever unlucky Jackson.

All three had to make ugly faces in a group photo, which would be uploaded to TAP’s social media profiles.

Seven lucky fans were able to play on stage alongside their idols after their seats were chosen at random as part of the fanmeet experience.

The fans were instructed to throw balls into a bucket their partner idol would hold over their head.

“It’s the bucket’s fault!” Jackson said, laughing every time he and his partner could not score during the game because the balls would bounce out.

The winner of the game, Mark’s partner, took home a priceless award: a polaroid photo together with GOT7. 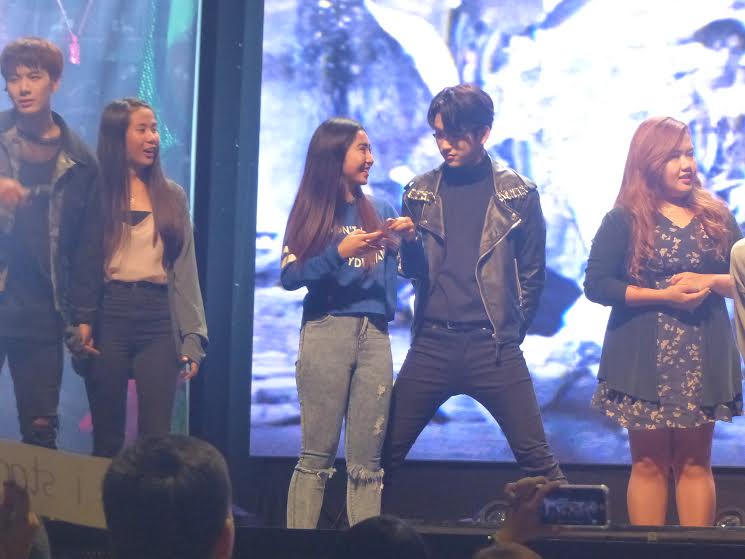 Jinyoung of the K-pop group GOT7 plays a game with a fan during a fanmeet at the Waterfront Cebu City Hotel and Casino on Dec. 21, 2016. (PHOTO BY BEMBEM GOMEZ/ INQUIRER VISAYAS)

GOT7 also performed a number of songs including their recent hits “Hard Carry” and “Fly.”

Fans happily cheered and sang along with them. Towards the end of the fanmeet, the fans revealed a surprise for the members.

A video showing what GOT7 meant to the fans played on the LCD, and fans proudly held up banners in Korean, which translated to “GOT7 is the pride of iGot7.”

VVIP ticket holders got a special privilege at the end of the fanmeet: a chance to take a photo with their idols in a group of 15 fans and GOT7 or a ‘high touch’ wherein fans could receive a high five from all seven members.

VVIP ticket holders were randomly chosen to participate in the high touch during admission through ticket stamping.

Afterwards, VVIP ticket holders were given signed special edition solo posters of the Got7 members. Unfortunately the posters of VIP, Premium, and Balcony ticket holders as well as all their albums were not able to reach Cebu in time for the fanmeet.

Fans were advised to keep updated via TAP’s social media profiles for updates on the album and poster collection.

Got7 arrived in Cebu last Dec. 20, as part of the promotional tour for their latest album “Flight Log: Turbulence” which has 13 songs, including the title track “Hard Carry.”

They were scheduled to continue promotions in the country through a fan meeting in Manila on Dec. 23 at the KIA Theatre, Cubao, Quezon City.  SFM