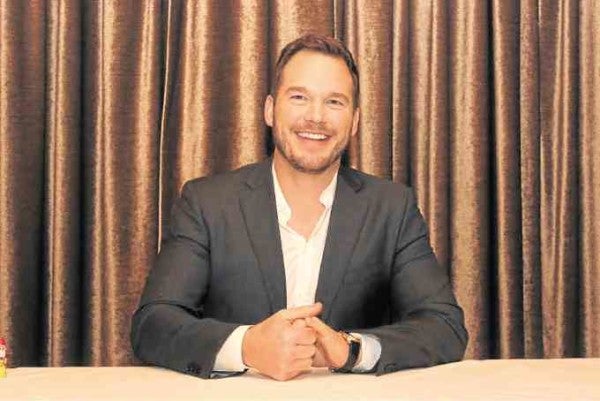 LOS ANGELES—The topic was his new movie, “Passengers,” so Chris Pratt was asked what his unusual experience was as a passenger during a flight. “Joining the Mile High Club, probably,” he revealed with an impish smile.

“I was just telling this story today,” Chris added. “That is like when you have sex on an airplane. I did that on a flight to Amsterdam about 15 years ago.  That was probably the coolest thing I’ve ever done at 30,000 feet. It was pretty cool. Now, they check the toilets. But I got in just at the right time.”

It was early evening in a restaurant in Beverly Hills. Chris’ candid admission made us think, we should have more interviews at night.

In Morten Tyldum’s sci-fi adventure, “Passengers,” Chris and Jennifer Lawrence star as strangers on a long journey to another planet when their hibernation pods wake them 90 years too early. The two are essentially by themselves in the humongous spaceship-luxury liner, Avalon, even though they’re part of the biggest mass migration in human history.

While their 4,000-plus fellow passengers are still sleeping in the 120-year trek, Jim and Aurora are forced to solve the mystery behind the malfunction in order to survive.

What if he and Jennifer were stranded for decades on an isolated island in real life, we asked the Minnesota native who was raised in Lake Stevens, Washington. “Awesome,” he quickly replied. “I could pick worse people. Jen is terrific. She has an infectious spirit. She’s an intoxicating presence. I love being around her. She is really fun, funny, witty and strong.

“Making this movie could have been a real nightmare. It’s two people for 16 to 17 hours a day for several months. There was not a lot of cast members. Just us. So, if Jen was a nightmare, it would’ve been a totally different situation.

“But we hit it off immediately. So, if I couldn’t choose Anna (Faris, his wife) or my family (to be stranded with) and it was Jen, I’d be pretty happy. It would still be a shitty situation, being stuck on a desert island.”

“I’m OK,” he said when asked if he’s a good handyman in the house. His Jim character is a mechanical engineer, so he tries, with Aurora’s help, to fix the massive spaceship that’s quickly failing. “My wife would roll her eyes if I said yes. I am capable of fixing things, but I just don’t do it often.”

The actor, best known as Andy Dwyer in the “Parks and Recreation” TV series before he broke through in film, declared that he actually welcomes solitude every now and then. 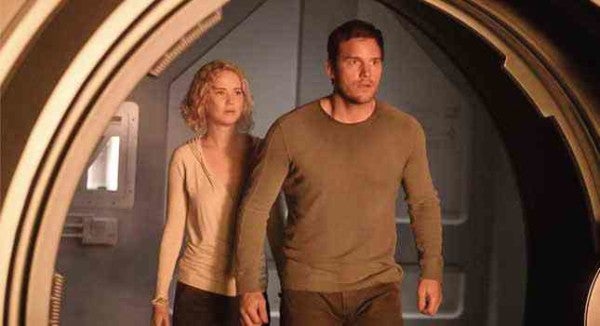 “I am capable of being alone without being lonely,” he said. “I’ve never been forced to do it for an extended amount of time. I have certainly been lonely. I sometimes crave solitude. It’s probably why I find myself fishing and going out in the wilderness, especially with the life that I lead now. There’s so much stimulus.

“It’s nice to cut myself off from that and just enjoy the woods and nature. I don’t necessarily mind being alone, but I would hate to be forced to be alone. There’s a reason solitary confinement is a form of punishment. Cutting ourselves off from human interaction is torturous.”

Chris commented on the obvious difference of “Passengers” from the “Guardians of the Galaxy” franchise (“Vol. 2” will be shown next year), where he plays Peter Quill/Star-Lord.

“But there are similarities. You’re in space,” he began. “But the color palette is totally different. They’re different visual experiences. ‘Guardians of the Galaxy’ is wild, colorful and fun.  The Avalon (spaceship) is a beautiful Starliner, but it’s desolate, ice-cold and inhospitable, even though it looks like a shopping mall that you’d see in the future.

“(In ‘Passengers’), I am human. I don’t have any type of powers. We aren’t dealing with aliens. We’re dealing with some ominous forces—not to spoil—but it’s all very human. To me, the film is more of an Adam and Eve story. That’s how I see it—as an observation on mankind, the fall from grace, the sin that we have and how that affects us, the guilt that we feel for the first time, and our quest for redemption.”

Chris has a scene with Jennifer that, let’s just say—to avoid spoilers—impacts everything. Has the actor experienced an incident that he knew would change his life for good?

“I know I’m in a privileged position to look backward at my life,” he answered. “I am happy with the position I find myself in now and pray that it will keep going in that way. There are specific moments where I felt that my life was changing.

“The first time I ever had an audition, I was in Hawaii.” (He was 19, homeless in Maui, and worked as a waiter at Bubba Gump Shrimp Company restaurant.) “I met an actor (Rae Dawn Chong) who was directing a movie and gave me an audition. Halfway through the audition, she said, ‘You’re good. We are going to use you.’ 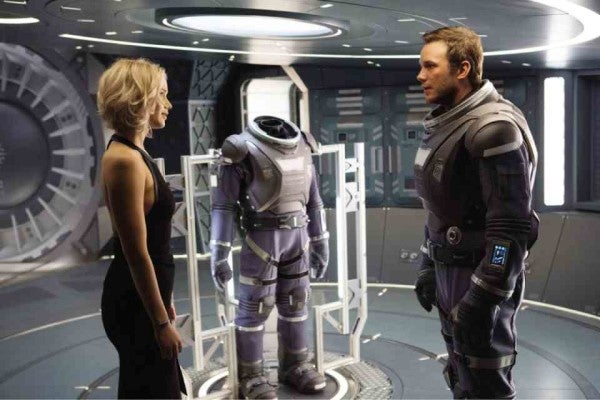 Pratt (right) with Lawrence in “Passengers”

“I said, ‘Do you film the movie here in Hawaii?’ She said, ‘No, we film it in Los Angeles.’ I said, ‘I can’t afford to go to Los Angeles.’ She said, ‘We will fly you there, sweetie.’ I felt the Teutonic plates shifting beneath me. I actually knew in that moment that my life would change forever.

“And the things that led me to that situation—I broke my leg pretty severely when I was 7 years old. It grew in funny. At the time, my parents didn’t have any money. We couldn’t afford the hospital bills. I was a kid with a broken femur. If you look back on it, that is a little stroke of God’s grace saying it’s going to suck right now, but trust me, in the future, you’ll be glad you busted your leg, kid.

“That may have prevented me from doing sports in college, which led me down a completely different path. I wouldn’t have been there to have that audition in Hawaii, floundering as a 19-year-old who couldn’t afford to go to college. I think about that.”

Now, Chris is in two other huge franchises—he’s filming “Avengers: Infinity War” and is set to reprise his Owen role in an untitled “Jurassic World” sequel. When he’s away making these movies, Chris shared that he communicates via FaceTime with his son Jack, who, he said, “doesn’t realize how famous we are.”

“He’s 4, and he is enrolled in a great school,” the dad said. “With technology, it’s certainly a lot easier now than it was in, say, 1920 when you were [traveling] around the world and you sent one letter, and it might get there and it might not. You might correspond a few times via paper.

“I talk to Jack every day. I do everything I can. It’s one of the downsides being away, but I am hoping that we keep our eyes on the prize. We understand that what we’re doing right now and the sacrifices that we are making is so that we can provide him a better life.

“You don’t have to necessarily be (physically) present to be a presence. I am a presence in that boy’s life. I’m going to teach him all the tools that I think he’s going to need to survive a world that is going to be a little different than it was for us.

“I am 37, and I don’t f***ing understand it, but the 4-year-old might. I don’t know, man, that is a tough question. Obviously, I care deeply about his experience, but celebrity can be hard on people and difficult for kids.

“I am going to always teach him that you have a choice in life—to be OK or not OK.  And you need to be able to look at what you have and not focus on what you don’t have. I think he is going to have a lot of character, and I am going to raise him right.”