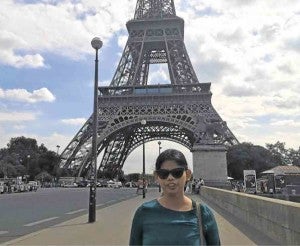 Katchcry Jewel Golbin, the blind Fillipina singer who will compete in the finals of France Got Talent on Dec. 13, 2016, relaxes by visiting the Eiffel Tower in Paris. (PHOTO FROM MS. GOLBIN’S FACEBOOK PAGE)

ILOILO CITY — The family of Katchcry Jewel Golbin is praying that the blind Filipino singing sensation will make history as she bids to win in this year’s La France a un Incroyable Talent (France Got Talent) finals on Tuesday evening (Wednesday morning in the Philippines).

“We are praying and hoping. We never thought this would be possible,” her mother, Estrella Golbin, told the Philippine Daily Inquirer in a telephone interview from their hometown in Tapaz, Capiz.

“All our friends, relatives and townmates have been asking us how they can vote to help her win, but it’s in France. We hope Filipinos there will help her,” she said.

Katchry Jewel or “Jel” to her family and friends is among the 12 finalists in the 11th season of the television program.

The 26-year-old English graduate who is known as Alienette Coldfire has captivated the show’s judges and audience for her singing talent and voice, profiency in speaking French and not giving up on her dreams despite her physical disability.

“Tomorrow is the day and I have every reason to feel anxious, but I’ll still try to sleep with a peaceful heart,” she said in her Facebook page on Tuesday.

She also thanked those who have been supporting her.

“Your messages of encouragement count. Know that I’m reading most of them. It’s just that I don’t have enough time to reply. Till tomorrow, good night,” Golbin said.

Tapaz Mayor Roberto Palomar has been helping Golbin in the competition, said Estrella.

The eldest of three siblings, Golbin has been blind since birth after she was born prematurely.

But this has not stopped her from pursuing her dreams.

“She always wanted to sing since she was a child. She started attempting to sing ‘Happy Birthday’ when she was two years old,” Estrella said. 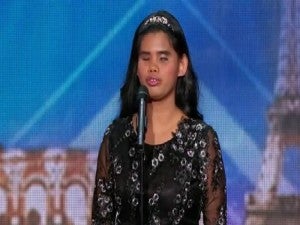 Katchcry jewel Golbin impressed the judges of France Got Talent by her proficiency in French, her talent in singing and her determination to realize her dreams despite her disability. (RADYO INQUIRER FILE PHOTO)

She said it was challenging for them to ensure that Jel woud go to school and earn a degree.

Estrella works as a clerk of the municipal government of Tapaz while her husband Edgardo is a former overseas worker who now drives a taxi in Iloilo City.

Golbin first enrolled at the SPED Integrated School for Exceptional Children in Iloilo City and later in Tapaz.

She then studied at the Iloilo City National High School where there is a program for students with disabilities.

Golbin earned her English degree at the Central Philippine University. But she had to learn computer skills for the blind to finish her thesis.

In college, she enrolled in French as a course elective. But aside from her subject, she practiced speaking French with Facebook friends using a special software.

“Her teacher was surprised that she was advanced in speaking French because almost every night she spoke with her friends,” Estrella said.

Golbin first became an online sensation two years ago after a video of her singing Mariah Carey’s “I’ll Be There” at SM City in Iloilo City became viral.

Her friends encouraged here to try out for the French Got Talent show.

She first submitted videos of her performing 10 French songs. She was later to asked to send three more after she was shortlisted.

Her younger sister Kathryne Faith has been accompanying her in the competition in France.

In the elimination round, Golbin drew tears including from one of the show’s judges for her rendition of Les Miserables’ “I Dreamed A Dream.”

She earned a spot in the finals after she sang “Les Moulins de Mon Coeur (The Windmills of Your Mind)” during the semi-finals on December 6.

“I live a dream awake!” she posted in her Facebook page after qualifying for the final round.  SFM