Review: A poet on the run in startlingly great ‘Neruda’ 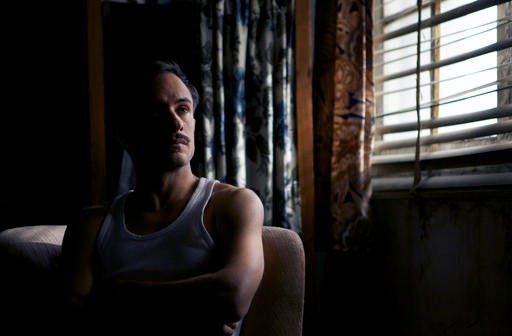 This image released by The Orchard shows Gael García Bernal in a scene from, “Neruda.” (The Orchard via AP)

Chilean director Pablo Larrain is on a hero’s quest to destroy the conventional biopic it seems. He turned the post-assassination days of Jacqueline Kennedy into an atmospheric examination of mythmaking and the public and private self in “Jackie,” and in “Neruda ,” the story of a poet on the run, into a thrilling meditation on authorship.

The stories of both Jackie Kennedy and Pablo Neruda are already compelling on their own, but Larrain manages to go beyond the specifics and get to their essence through powerfully and uniquely cinematic storytelling. Larrain is not interested in dramatizing a Wikipedia page, but getting to the truth in spite of the facts. In this way, even though he explains relatively little, he reveals quite a lot.

New York Times Book Review critic Selden Rodman said of Pablo Neruda that “no writer of world renown is perhaps so little known to North Americans.” I certainly didn’t know anything about the Chilean poet, and that fact is likely inextricably linked with my assessment and enjoyment of the film, but not to its artistic merits, of which there are many.

Neruda was and is that rarest of creatures — a popular poet of the people.

“This man would pull a piece of paper out of his pocket and 10,000 workers would go silent to hear him recite poetry,” says one character in the film.

His communist affiliation made him an enemy of the state in post-WWII Chile, however, forcing him into exile in 1948.

We’re introduced to Neruda (played by Chilean actor Luis Gnecco, who gives a tremendous dramatic performance) living life as a communist senator, a poet and an all-around bon vivant with his aristocratic wife, Delia (Mercedes Moran). He’s pompous and charming and hedonistic and empathetic all at once — but glaringly disconnected from the people he writes about and for.

When a warrant is issued for his arrest, Pablo and Delia go on the run away from their fancy digs and parties and friends and attempt survival in more modest settings, always fearful of who might be around the corner ready to report them to the authorities. Pablo sneaks out on occasion to mingle with the local prostitutes when he’s not writing.

On their tail is a police officer, Inspector Oscar Peluchonneau (Gael Garcia Bernal), a character who was invented for the story to make it more of a fable. While “Neruda” starts out a little slow, it kicks into gear with Oscar’s arrival. He’s a noir-style detective on the hunt for the exile with mechanical resolve, but within these genre confines the story manages also to be immensely playful and insightful, too — about politics, authorship and art — as it toys with form, tone and story. 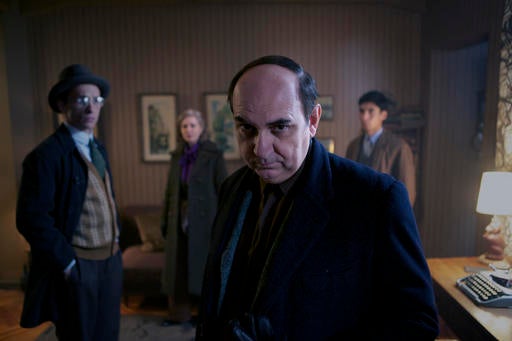 This image released by The Orchard shows Luis Gnecco as Pablo Neruda in a scene from, “Neruda.” (The Orchard via AP)

There is a great meta conversation between Oscar and Delia at one point in which Delia tells Oscar that he is merely a secondary character who is given context and life only by the man he’s pursuing. The artificiality of the self-conscious exchange is exaggerated by their shifting setting (one moment they’re inside sitting at a table, the next they’re outside standing face to face). Larrain also gives Oscar’s pursuit of Neruda an intentionally fake quality by using rear end projection during shots of him driving. It is silly and looks silly, but somehow it works, drawing you further into a trance-like state rather that shaking you out of the movie magic with a cheesy, antiquated technology.

But again, “Neruda” is more interested in the ineffable experience than reality, or making you forget you’re watching a movie. Not many directors get a one-two punch like “Jackie” and “Neruda” in the same season, but it just makes it all the more clear that Larrain is one of the world’s most exciting and imaginative filmmakers, whatever the subject may be.

“Neruda,” a The Orchard release, is rated R by the Motion Picture Association of America for “sexuality/nudity and some language.” Running time: 107 minutes. Three and a half stars out of four. TVJ