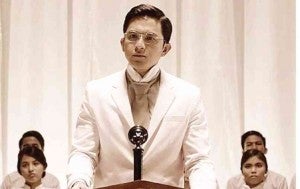 “Felix Manalo,” a historical biographical film dramatizing the life of the late Iglesia Ni Cristo leader, was the winner of the best picture trophy at the 64th Famas (Filipino Academy of Movie Arts and Sciences) Awards ceremony on Sunday night.

Andi Eigenmann bagged the best actress trophy for her performance in the Carlo J. Caparas film “Angela Markado.” She dedicated her victory to “all the women who have fallen down but have managed to stand back up again.”

“No matter what happens, don’t give up. The Lord will always show you that you’re meant for something. For me, it was winning this award from Famas,” Andie said during her acceptance speech during the ceremony held at the Century Park Hotel in Pasay City.

The best visual effects award was given to Vincent Ilagan and Mike Velasquez for “Angela Markado.”

Cesar Francis Concio took home the best musical score honor for “A Love Affair,” while Rain Yamson was given the best cinematography trophy for “Silong.”

The following were the special awards handed out on Sunday night:

A special citation was given to Chief Public Attorney Dr. Persida V. Rueda Acosta and a posthumous award for German Moreno.

The male and female Stars of the Night were Piolo Pascual and Lorna Tolentino, while the recipient of the Male and Female Look of the Night awards were Robi Domingo and Jean Garcia. –ATM