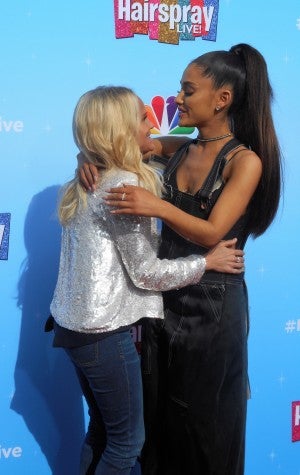 Los Angeles—“Why are we crying?” Ariana Grande asked aloud as she and Kristin Chenoweth smiled and wept at the same time, hugged and held hands.

The two singers were recalling the first time they met—when Ariana, only 11 years young, got a chance to visit Kristin backstage during the latter’s “Wicked” run on Broadway.

We were on the lawn at Universal Studios’ Courthouse Square, famous for being the backlot set of the “Back to the Future” trilogy (remember the clock on the courthouse building?).

This time, we were back in the past as the two chanteuses—one barely in her teens and have to yet to make a mark in the pop world, while the other has already won a Tony Award—reminisced through tears and laughter about that fateful meeting on Broadway.

Now, Ariana (as Penny Pingleton) and Kristin (Velma Von Tussle) are costars in “Hairspray Live!” which is based on the Broadway hit set in 1962 Baltimore. “Hairspray Live!” premieres in the Philippines on Thursday, Dec. 8, at 9:25 p.m. on Diva (Express from the US).

Earlier, we went inside a soundstage and got instantly transported to the 1960s when we saw “The Corny Collins Show” set, one of several constructed for the musical event. 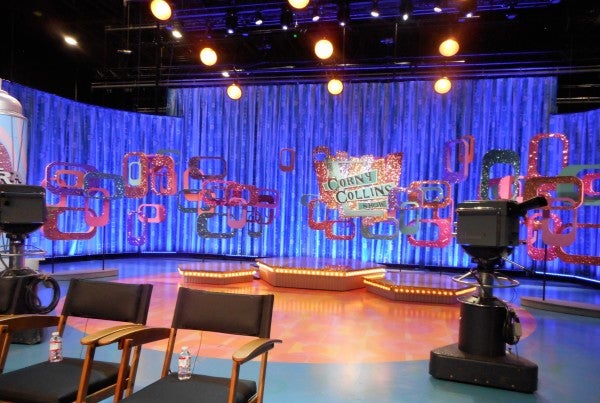 One of several sets for “Hairspray Live!” Photo by Ruben V. Nepales

Then, we sat down for a discussion (moderated by TV host Dave Karger) with the show’s creative panel, which included Harvey Fierstein, who reprises his Tony Award-winning turn as Edna Turnblad and also wrote a new teleplay for this live TV version.

In this group, Harvey, with his purple suit, distinct gravelly voice and wisecracks, easily stood out. Harvey thought he was done wearing bras as Edna, the mother of Tracy, to be played by a very promising newcomer, Maddie Baillio. 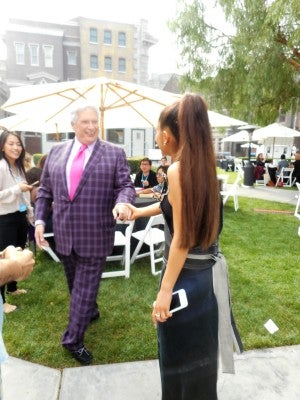 Harvey recalled the last time: “I did it at the Hollywood Bowl, and I said goodbye to Edna. Jerry (Mitchell, choreographer) and I stood together, and we said farewell to my breasts. I hung them up after the Hollywood Bowl and moved on.”

We learned that Ariana will duet for the first time with Jennifer Hudson, who plays Motormouth Maybelle. They will perform a song that’s deemed as relevant as the show’s themes of inclusion and integration amid the election of Donald Trump, who is being criticized as navigating the world by racial and ethnic stereotyping.

Executive producer Craig Zadan explained how the idea for the teamup of two powerhouse vocalists came about: “We asked Marc (Shaiman, the musical’s composer) and Scott (Wittman, colyricist) to write a song for the end credits of the movie version about a decade ago, called ‘Come So Far.’

“And I’ll be doing an ice ballet during the song,” Harvey cracked. “It’s my ice ballet—‘Edna on Ice.’”

We told (executive producers) Neil Meron and Craig that it was a déjà vu experience for us because we were also on the set of the 2007 movie version in Toronto.

Two actresses who played Tracy Turnblad will turn up in one of the live show’s numbers: Ricki Lake (who starred in the 1988 movie version directed by John Waters that inspired the musical play) and Marissa Winokur (who won a Tony in the Broadway musical adaptation).

As for the new Tracy, Maddie won the part over about 1,200 candidates.

Neil recounted, “Like on ‘The Wiz,’ we knew we wanted to find an unknown girl. We wanted to have our Cinderella story.  We showed up that morning, and there were about 1,200 girls—including videos and others that were submitted. It was a large selection.

“Maddie walked in the room, and we all saw something that was appealing and incredibly Tracy.”

Choreographer Jerry Mitchell chimed in, “And we put Maddie in the wig and makeup for her final callback, because that tells you everything. They just framed that little face. She sang ‘Good Morning, Baltimore.’ We all started to cry.  It was so moving.” 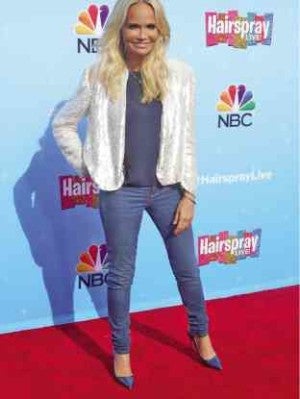 Excerpts from out chat with Ariana and Kristin:

Ariana, you went to the producers because you have loved this musical since you were a little girl. Can you elaborate on your relationship to “Hairspray?”

Ariana (A): First of all, I went to Broadway to meet this woman (Kristin) when I was 11.  I won the opportunity to meet Kristin and go to her dressing room.

She gave me like a shower gel. I took that shower gel home. I saved it and used a tiny ass bit of that sparkly gel every day.  So this (“Hairspray Live!”) is not only about working with many people I grew up with and followed religiously.

Also, Penny was the role that resonated with me the most. I saw the original Broadway cast, and I loved Kerry Butler (who played Penny) so much.

So, why did the Penny character resonate with you?

A:  I’ve always gravitated toward quirky and awkward. Penny is so ahead of her time. Her mom (Prudy, a racist woman) is the opposite of Penny.  Penny is like bursting at the seams, and she can’t wait to hold Tracy’s hand and help her fight for what’s right.

Kristin, what do you remember about that first meeting with Ariana?

I remember this tiny little nugget (Ariana) saying to me, “I like theater, too. I want to do what you do.” I fell in love with her and her brother, too.

Kristin, what is your own relationship to “Hairspray?”

K: I saw the show the year before “Wicked.” I went to see the show because I love Marc, Scott and Harvey. Of course, I looked at Amber Von Tussle and thought, I wonder if I could ever play that part? And now, I sing “Miss Baltimore Crabs” (as Velma Von Tussle, Amber’s mom).

Ariana, what’s it like being part of an ensemble like on this hybrid musical, since you are used to being out there on the stage on your own?

A:  It’s refreshing—and so much fun! I feel like I am at sleepaway camp. I love everyone so much. Every single one of the nicest kids in town came over to my mom’s house last night.

Does this feel like high-stakes or more pressure than performing onstage or going on tour?

A:  Kristin just finished doing her show in New York, and I am about to go on tour. But we’re alone in that. There’s a family in that, as well, but this is different because you’re playing somebody else. You don’t have to worry [about] being yourself.

On this show, you’re going to be live—you can’t stop and go, “Let’s do this again.”

A: There’s a lot of discipline that goes into it. We are going to be as prepared as we can be. We’ll just have the best time, really—it’s just fun.

The best thing about having a theater background is that when something goes wrong, we got it; we know what to do.