Annette Bening on Warren Beatty, Catwoman and other roles she gave up 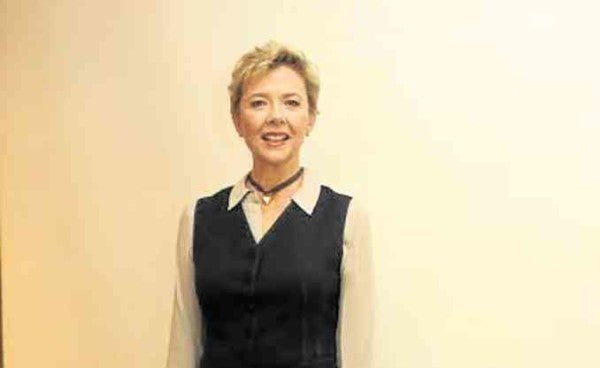 Los Angeles—“I would have loved to play Catwoman, but I got pregnant,” Annette Bening said matter-of-factly about the role that eventually went to Michelle Pfeiffer. We were talking with the two-time Golden Globe best actress winner about the roles she gave up one recent morning here.

“When you come down to those kinds of choices, they don’t even come close. I had my first baby,” added the actress, noted for her gracious and genteel presence.

Annette also backed out of Barry Levinson’s “Disclosure” because of pregnancy. Demi Moore landed the part as a result.

“I think it had to do with children and babies and being pregnant again,” she confirmed with a smile. “I don’t really remember, but usually when I’ve turned things down, it was because of kids.”

And she had four kids with actor-director Warren Beatty, whom she married in 1992. “I don’t walk around thinking, oh, I wish I’d done that. Every once in a while, there’ll be something that’ll come up and I’ll think oh, wait, could I have done that one?  I think so, and no. It’s good to have time off.  It’s good to be away.”

A part of Annette’s Annie Hall-ish ensemble even has a cinematic connection. “I wore these pants in ‘Being Julia,’ so that was quite a few years ago,” she shared. Annette won her first Golden Globe for “Being Julia” in 2005.

Warren directs Annette for the first time in “Rules Don’t Apply.” The proud husband was quoted as saying in an interview that there’s no better actress than Annette.

“My husband is the best actor,” she returned the compliment with her winning smile. Being directed by Warren has made her fall in love with him all over again. “Well, we’ve been married almost 25 years so, yeah.” She volunteered that her own parents have been married for 66 years. “Isn’t that sweet?” she remarked.

Annette first met Warren, who was then known as a commitment-phobic ladies’ man, to talk about a movie project, “Bugsy.”

The four-time Oscar nominee opened up about her husband. “What I find interesting and feel like talking about is his acting process,” she began. “He never talks about it, because there are many other things to talk about. He’s producing and writing—everything else that he’s doing. He’s also very smart about not talking about it.

“Those of us who act and don’t do all those other things, we have to talk about it, because that’s all we have.

“When he is directing, he’s getting everything right—the lighting, props, figuring out where he wants to put the camera, how many angles he wants to do, and how much time he has. Then, he just steps into the scene and says, ‘Roll,’ on himself. It’s very interesting—and it looks seamless. In fact, it’s so much so that nobody even notices it.

“We didn’t have any scenes together in ‘Rules Don’t Apply.’  He shot a scene early in the process that is in the center of the movie. He just walks in, sits down, starts the scene. I would have felt that way about it like any actor watching him do it the way he did it. But it was my husband, so I was particularly admiring this quality that he has as an actor. He was trained by Stella Adler, but he really has chops.”

Asked to elaborate on Warren’s Vanity Fair quote that their children are “four, small Eastern European countries that live in our house,” Annette broke into a gentle laugh and answered, “Yeah, that’s one of the things Warren says. What he’s talking about is how our children are all very distinct from each other, fascinating and sometimes hard to predict, and he also talks about negotiating (laughs).

“He is also about negotiating. There’s a process of negotiation when we have children in a good, healthy way. He’s also trying to be flattering and complimentary to his kids.”

“Bogart is one of my favorite actors,” Annette said. “I have been watching quite a few of his movies recently for this film, as well as for something else I’ve been working on. He was also loved in the community, which I love about him.  There’s a great YouTube interview with David Niven talking about Bogart. Bogart was apparently a great man. That’s always heartening to me.

“Mike Mills had wanted to talk about Bogart to me, because my character, Dorothea, loves Bogart. She says at one point, ‘In my next life, I might marry him.’ I’m thinking about that. Also in a way, she is Bogart, and that she had certain qualities that were like Bogart.”

On the status of 21st century women, Annette is hopeful. “I would say that given where we’ve been, patriarchal structures are beginning to change… When you look at second-wave feminism as Mike’s writing about in the film compared to where we are now, it’s fascinating. I don’t think it’s moving in one direction but certainly, more women are in positions of power in the western world. Deep in me, I feel a sense of optimism about where things are moving, but it’s a slow curve.”