Eddie Redmayne on mating dance with fantastic beasts and more 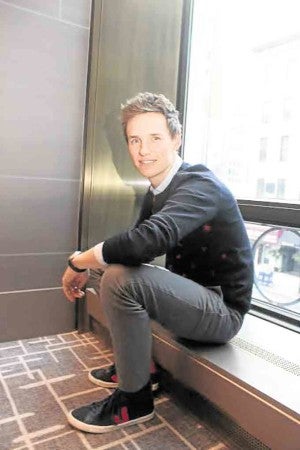 LOS ANGELES—“‘And then he performs a mating dance.’ Those last two words gave me sleepless nights for months,” Eddie Redmayne recalled with a laugh, a line in the script of “Fantastic Beasts and Where to Find Them.”

But the actor pulled off a courtship dance with a fantastic beast with gusto in director David Yates’ film version of JK Rowling’s book which she herself adapted for the big screen (her first ever screenplay).

Eddie plays Newt Scamander, described as a “magizoologist” for the Department for the Regulation and Control of Magical Creatures who travels the world in the 1920s and writes a textbook for freshmen at Hogwarts.

Wearing a blue sweater with red bee accents, blue shirt and gray pants, Eddie was his usual genial, smiling self at the Four Seasons Hotel New York Downtown. Eddie explained how he learned to do a mating dance with a beast that he can only imagine in his head. But the monsters and many more come to life in the first spinoff of the blockbuster “Harry Potter” movie series.

Grinning, Eddie dished, “We looked up all these YouTube videos of mating animals. I made a fool of myself for two weeks.

“David Yates has on his phone videos of me doing these different mating dances, which could end my career. It was so embarrassing (laughs). Sweetly, he would call up—and I’m sure you know David, and he has the loveliest manner in the world—and he’d go, ‘Maybe that one was too tribal or too aggressive.’ He would give me notes and, gently, we found our way through. ”

The tousle-haired British actor, who became a dad last June when his wife, Hannah Bagshawe, gave birth to Iris Mary, said the most fantastic moment in his life so far “is a tie between my wedding day and the arrival of Iris. ”

As Newt, Eddie sports a blue wool coat that apparently even Harry Potter—or Daniel Radcliffe—covets. “There was a really funny moment [when] I read in a Dan Radcliffe interview that he envied my coat,” Eddie shared, his eyes lighting up. “He was like, ‘I only ever got to wear hoodies.’ I thought, I dream of wearing a hoodie and a pair of jeans in a film (laughs).”

Asked where he would go if he had a magical suitcase like Newt’s, Eddie answered, “I love where we live in London, and I love the energy of that city. We live in [a house with] kind of a Dickensian past that is filled with history.

“We also rent a house in the countryside, which is in the middle of nowhere—super quiet and beautiful. So, I would love a suitcase like Newt that has both of those places inside. Ideally, with all my family in it. But no cats (he’s allergic to them). ”

No cats, but does he carry beasts in his luggage when he travels? Eddie playfully admitted, “There is Frank the Bear, who’s a teddy bear. He came from Easyjet, the low-cost British airline. Early on in my relationship with Hannah—this is far too much information, but I’m going to share it anyway, even though she made me explicitly promise never to talk about Frank the Bear—we were going on a holiday to Italy.

“We had known each other for a long time, but we didn’t know each other that well. We found ourselves on a flight and we were both talking, just like filling awkwardness with chat. We were looking through the Easyjet magazine where they were selling this teddy bear Frank which you could buy on the trolley. You win 250 quid and I think some free flights if you take a photo of Frank in exotic locations.

“We were like, ‘We can do this. We can nail this!’ Frank has become like the other person in our relationship. We had to talk to Frank when Iris arrived. Frank was sitting in Iris’ little crib when she arrived into the world. Frank is now looking really battered and it’s been awhile. 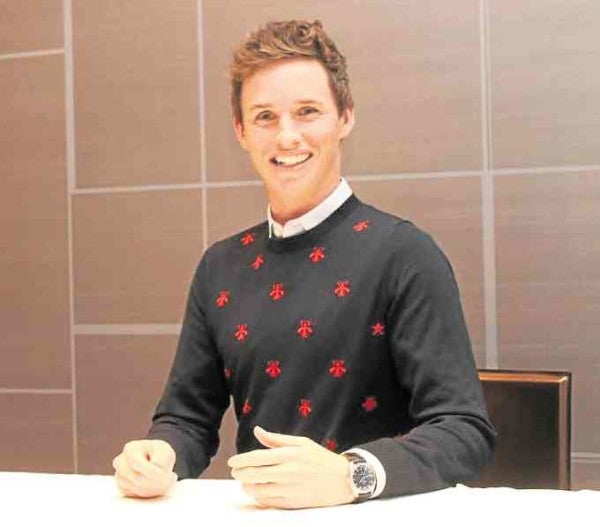 “But Frank genuinely does come in my suitcase. I have this embarrassing thing—I have a little Globe-Trotter case which I have had for years and I use as my work case. So Frank is currently staying in New York (laughs). Frank is here. He is sort of the beast.”

Since Eddie virtually lives in his luggage because of his busy career, how does he find quiet time with Hannah these days? He revealed, “Since making this film and promoting ‘The Danish Girl,’ I have not worked. It’s just been heavenly but too lovely. This is the first time that I have taken a wee breath.”

On whether he has quick instinct for sizing up people in the show biz world that’s like Newt’s universe where some people are not what they seem to be, Eddie replied, “The quick answer is no. I feel like I have instincts to people. But I can get seduced by warmth and then quite often, I will realize that it’s not what I see.

“I am quite quick to trust people as well. I find occasionally that that cannot be helpful but you try to keep open-hearted because otherwise, you become a cynic. But I have also been proven wrong (laughs). My wife is a much better judge of character than I am (laughs). ”

We brought up a night in Berlin that came up in our recent interview with Jamie Dornan. A few years ago, we chanced upon Eddie and his friends hanging out in this restaurant in Berlin. We laughed at that happenstance—what were the odds of bumping into him in that part of the world and on that night?

Turns out that Jamie—before “Fifty Shades of Grey” happened—was in that group with Eddie. Jamie laughingly claimed that the journalists’ presence made him and the gang stop drinking and behave.

“But they didn’t,” Eddie countered, smiling. “It was Jamie Dornan’s stag weekend. We just arrived in Berlin that day. We started getting really quite drunk and we got to this restaurant which was far posher than I thought a stag weekend restaurant should be. We were sitting there—there were about 20 Irishmen. Rafe Spall was also there. I was beginning to slur my words.

“I think I had met you guys quite recently for the first time. Then I suddenly got patted on the shoulder and I can’t remember which one of you it was. Then all of you walked past. What was hilarious was these Irish guys were going, ‘F**k, who are these people? How does Eddie know so many people in Berlin? What restaurant are we in?’

“I tried to explain that it was a group of international journalists. They could not get their heads around it. They were like, ‘They are all here because of what?’ I was like, ‘I don’t know, but how drunk am I? Did I spill any secrets?’ I still remember it with great fondness. ”

Eddie, who turns 35 in January, talked about the disadvantage of having a birthday right after the holidays. “I was born on the sixth of January which is just after Christmas,” he began. “So basically, everyone forgets about your birthday or they go, ‘I have given you a joint Christmas and birthday present.’

“I have learned over the years when I was a kid. You know that extraordinary bathos after Christmas when you have had so much excitement leading up to Christmas and then it’s over? Then you know you have to wait another whole year until it happens again. Well, I was like, ‘I have a birthday in two weeks!’ But now it just means that people forget about it so yeah, it tends to be quite a low-key event. ”