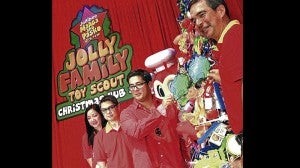 A self-confessed batang kalye, Aga Muhlach grew up playing with teks, tops, marbles. He fondly recalls being nuts over Voltes V actions figures, and getting scolded by his parents for catching tadpoles in the gutters.

All told, the 42-year-old TV5 actor feels he had a wonderful childhood. And for the past 16 years, Aga has been giving less fortunate kids the chance to experience the simple things he used to enjoy through Jollibee’s gift-giving initiative “MaAga ang Pasko.” It’s something that he looks forward to doing every year.

“It’s nice to know you’re doing something good for the kids, that you’re making them happy,” he told the entertainment press during the recent launch of the 17th “MaAga ang Pasko” at SM City North Edsa’s Sky Dome.

Inside the venue, colorful lights and lanterns dangled from the ceiling. With Christmas trees, balloons, game booths and photo stations, it was an early celebration for hundreds of young students who attended.

Since the project’s inception in 1994, over 1.8 million toys and books have been given away to thousands of kids. This year, gift boxes will once again be distributed via 730 Jollibee’s branches nationwide.

“We’re making less fortunate kids feel that other people think and care about them. They’ll grow up knowing they are not being neglected,” Aga said.

He shrugged off praise for his generosity and goodwill. “Hindi ako nagbabait-baitan. Ayoko naman na parang santo ako,” he said, pointing out that Filipinos are “naturally giving.”

As a parent, Aga said he makes sure his 9-year-old twins, Atasha and Andres, will grow up with compassion for the poor and the same willingness to help. He proudly said his kids have been donating their own toys for quite some time.

“You want nothing more than to make sure your kids grow up right,” he said. “Sure, you can provide all the material possessions in the world, but that’s not what they really need.”

Asked how he instilled the importance of giving in his kids, Aga said, “Charlene and I are simple people, not materialistic. That’s what the kids see in us as they grow up. The best way to teach your kids is to lead by example, not just through words.”