‘Till I Met You’ in hot water for ‘inappropriate,’ sexually charged scenes 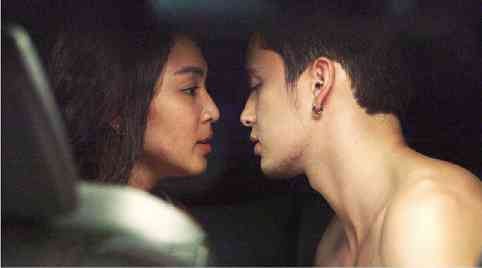 The Movie and Television Review and Classification Board (MTRCB) has summoned representatives of the ABS-CBN prime-time soap opera, “Till I Met You,” to a conference set on Nov. 10.

The meeting was arranged between the board and the show’s staff to clarify certain matters involving four episodes of the show aired on Oct. 25, 26, 27 and 28.

In a letter dated Nov. 2, MTRCB Chair Eugenio Villareal said that the board had received “feedback from both social and conventional media” on the above-mentioned episodes.

A complaint was posted online regarding a scene depicting premarital sex in a parked car between the soap’s lead characters, portrayed by popular young stars, James Reid and Nadine Lustre (known as JaDine).

Villareal told the Inquirer that other scenes will be tackled in the meeting, as well.

According to the MTRCB letter, some audience members deemed “the daring love-making scene in a motor vehicle,” which was aired on Oct. 25, “unfit for television,” in spite of the SPG (Strong Parental Guidance) advisory.

The board also received feedback regarding the “casual use of the words ‘sex lang ’yan’ without reference to or in disregard of the institution of marriage” in the Oct. 26 episode.

Other complaints arose from the Oct. 27 and 28 episodes which contain “sexual teasing…and outright sexually charged bath-related scenes,” even though it only had a PG (Parental Guidance) rating. Some viewers considered those sequences “inappropriate” for television, the board’s letter pointed out.

The board took note that the SPG and PG ratings “admit the reality of having young audiences.”

Invited to the conference were the show’s directors Andoy Ranay and Antoinette Jadaone, along with writer Shugo Praico and producer Arnel Nacario.

Laurenti Dyogi, ABS-CBN’s head of TV production, was likewise furnished a copy of the board’s letter.

Ranay and Jadaone  told the Inquirer that they and the soap’s other representatives will be attending the meeting, where they will be expected “to present their side.”