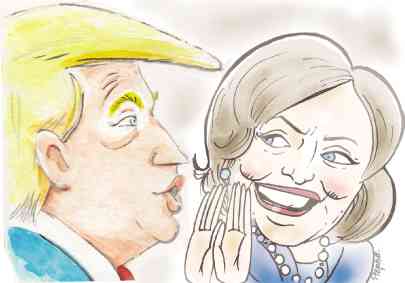 Some months ago, we cited US President Barack Obama for his effectively funny zingers at a media “roast.” We speculated that, after his stint as president, he could quite possibly end up on TV as a stand-up comedy star, with a unique specialization in political humor.

Recently, it was the turn of presidential candidates, Hillary Clinton and Donald Trump, to turn sardonic comedians for a night, at the fund-raising Al Smith Memorial Foundation dinner for Timothy Cardinal Dolan’s bishopric in New York City.

You would think that, right after their third and most bruising TV debate the night before, all the political combatants would want to do was to sleep for 48 hours straight!

But, they must have accepted Cardinal Dolan’s invitation months before, because they were both present and accounted for, and fully armed with scripted jokes to regale the crowd and “wittily” needle each other, tit for tat.

It was a far cry from the much more vicious and even lethal insults they had hurled at one another just a day before, so the unexpected shift from nasty to “nicer” was definitely welcome.

The evening also turned out to be a rare opportunity for viewers to size up Clinton and Trump’s own ability to “go funny,” in instructive comparison to Obama’s already proven proficiency. So, who won viewers’ “better comedian” vote, weeks before the US elections this week?

You would think that, given his many years of experience as a reality TV show host on “The Apprentice,” Trump would have a huge edge over Clinton in this specialized regard. He also spoke first, which gave him an additional advantage.

But, the one-on-one competition turned out to be surprisingly close—not because Hillary was so naturally  hilarious, but due to Trump’s rather sour and exceedingly heavy delivery, many punchlines turned out to be duds.

His most effective salvo, which did bring the house down, was his puckish account of a fictive encounter with Clinton, in which she accidentally bumped into him and politely whispered, “Pardon me.”

Everyone, including Hillary, laughed at that, because it “referred” to Trump’s threat to jail her for her real and other “crimes.”

Then, as the hoots of laughter abated, Trump masterfully slid into his “followup”: “I told her politely—to wait until I become president, before I could do something about her request!” That got an even bigger laugh, and Trump looked pleased as punch!

For her part, Hillary also scored with some of her grinning asides and references, like a self-deprecating joke about her love for taking really long “naps” to recharge her batteries.

But, both speakers came up with “bombs” that landed with big, unfunny thuds, so Obama is still the reigning pol-turned-entertainer—and can be forgiven for archly and breezily advising Trump and Hillary: “Don’t quit your day job!”